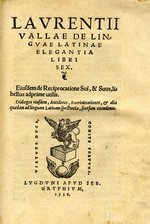 Prefacing praise to his Pope Nicholas:

"A man of parts, skilled in the subtlest sciences;

A patron of the arts, of poetry; and of a fine discernment."

Then comes a catalogue, his jewels of conversation.

No, you've not read your Elegantiae-

A dull book? - shook the church.

The prefaces, cut clear and hard:

"Know then the Roman speech, a sacrament,"

Spread for the nations, eucharist of wisdom,

Bread of the liberal arts.

Pound’s use of Lorenzo Valla’s De linguae latinae elegantiae is a mixture of half-quotations, pseudo-quotations and paraphrases, although the text of this Canto, in its distinction between statements within and without quotation marks, suggests otherwise.

“Know then the Roman speech, a sacrament,” is a free rendering of

“Great, then, is the sacrament of the Latin speech.”

Spread for the nations, eucharist of wisdom,/ Bread of the liberal arts:

These two lines are a paraphrasing summary of the following passage:

“And thus our ancestors outdid all others in military matters and many glorious deeds, and truly through the spreading of their language they became superior to themselves, as if by having left their power on earth they obtained the company of the gods in heaven. If truly Ceres is regarded as the inventor of grain, Bacchus of wine, and Minerva of the olive tree, and many others because of a gift of a similar nature are reckoned among the gods, is the fact that the Latin language as the best fruit and truly divine food, not of the body but of the soul, has spread among the nations  then a lesser thing? For this language has instructed those tribes and all people in all the arts that we call liberal;”

(Holds fast its part among the ever-living).

"Not by the eagles only was Rome measured."

"Wherever the Roman speech was, there was Rome,"

Wherever the speech crept, there was mastery

Spoke with the law's voice while your Greek logicians ...

More Greeks than one!

(Holds fast its part among the ever-living).

These two lines seem to be based on the following passage:

“Truly the more former times, in which no erudite man was to be found, have been unfortunate; the more we have to be grateful for our times in which, if we exert ourselves a bit more, I am sure that very soon the Latin [Roman] language is going to be restored more than the city, and with it all the arts.”

“Not by the eagles only was Rome measured.”

“… our ancestors refined themselves in every sort of study in an incredible way, to the extent that with regard to a military matter, no one was seen as outstanding unless through literary expression.”

"Wherever the Roman speech was, there was Rome,"

“Because wherever the Roman language dominates, there is Roman rule.”

“Wherever the speech crept, there was mastery

Spoke with the law's voice while your Greek logicians ...

More Greeks than one!”

This is a free paraphrase of the passage immediately following the statement given above:

“Now let the Greeks be what they are and let them occupy themselves with their multitude of languages. Our one language accomplishes more, even when it is meager, as they claim, than their five and, if they are to be believed, opulent languages; and of many nations the language is Roman just as there is one law; of the one Greece – and this is shameful – the language is not one but many, as if they are factions in a state. And foreigners reach agreement with us in communicating; Greeks cannot agree on anything amongst themselves, let alone that they may expect that others will be drawn to their speech. Their writers speak in various manners, in Attic, Aeolic, Ionic, Doric, and Koine; with us, that is, with many nations, everyone speaks Roman, the language in which all the arts that are worthy of a free man are encompassed, just as with the Greeks in their manifold speech;”