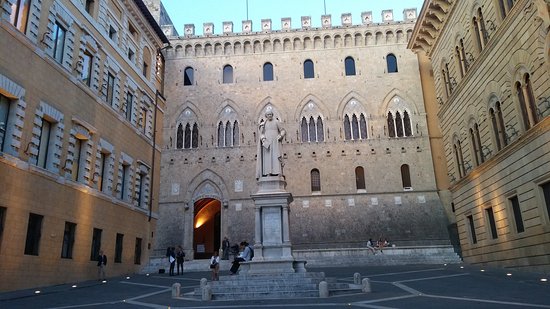 To pay 5% on its stock, Monte dei Paschi

Overplus of all profit, to relief works

and the administration on moderate pay ..

that stood even after Napoleon.

There is no mystery about the Cantos, they are the tale of the tribe—give Rudyard credit for his use of the phrase. No one has claimed that the Malatesta cantos are obscure. They are openly volitionist, establishing, I think clearly, the effect of the factive personality, Sigismundo, an entire man. The founding of the Monte dei Paschi as the second episode has its importance. There we find the discovery, or at any rate the establishment, of the true bases of credit, to wit the abundance of nature and the responsibility of the whole people.

As history becomes better understood I think this emphasis will become steadily more intelligible to the general reader.

I suggest again for clarity’s sake the idea of a usury axis, that is to say: the 30% racket on money rented out and risked in foreign mercantile expeditions was more than the traffic cd. bear if the traffic were to conduce to larger statal and imperial organization. Or you can say that the state of mind producing that racket was predatory rather than statal. It was the grab-at-once state of mind.

The racket or rental was in the circumstances justifiable in immediate aspects, far more so than the 60% money racket in our time, but it built no empire, and Alexander’s mere conquests were oriental.

The Roman 6% charge, on the other hand, conduced to stability.

CANTO XL [the history of the public bank idea in Italy]

CANTO LII [Siena and the Monte as sites of anti-usury; the opening to China]