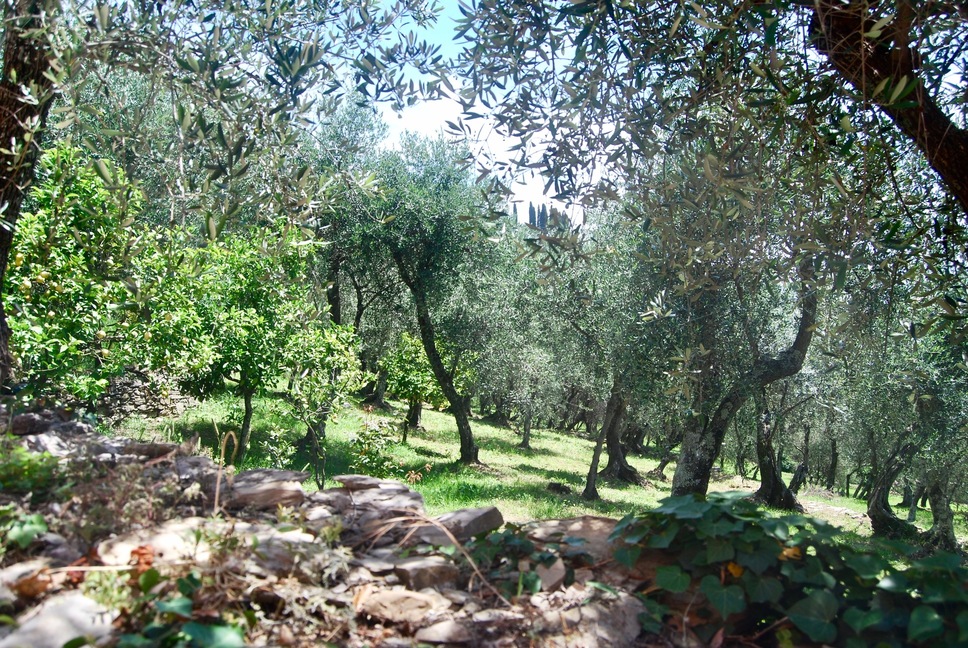 [115] In April 1939 I saw Rapallo for the first time. Since I had spent most of the previous summer studying, the school granted me a few days off, to say goodbye to Babbo. He was going to America.

Mamile was at the station to meet me. We drove in a carrozza to the bottom of the hill. Then we climbed for almost an hour on a broad cobbled path, on narrow stone steps flanked by gray holding walls, upwards under olives, past eucalyptus and lemon trees. The sea so different from the Venice sea, colors sharp and clear. It was a sunny, scented spring day, the terraces full of daffodils.

Casa 6o was then orange-colored, with Ionic columns painted on the outside walls, a flight of smooth black lavagna steps leading up to the green front door half hidden by Virginia creepers and honeysuckle. Thk thk thk GRR: the sound of the olive press on the ground floor. Ploff, chhu: the bucket hitting the water in the well.

The ingle of Circe… in the timeless air.

The house inside: light. White and empty. Polished red brick-tile floors. A square entrance, and four doors open on rooms with a view to the sea, olives and a blossoming cherry tree. Pale blue and pink vaulted ceilings with painted morning glory convoluting into bouquets and wreaths. [116]

The furniture, unpainted, was all made by Babbo. A long bookcase and a mirror in the entrance; a table in the dining room and four plain straw-bottomed chairs along the walls; a desk, a high broad shelf for music and violin and a narrow bookcase fitted in under the window in Mamile’s room. The only spot of color was given by the orange damask couch; the only ease was suggested by two armchairs, a broad one and a normal-size one, twins to the ones in Venice. A Babbo-made desk stood also in “my” room, where the rest of the furniture was an iron bed, a night table with a marble top, and a chair. This was referred to as the Yeats furniture. It came from the flat my grandparents took over from the Yeatses. The only items in the house with a touch of hardness.

There was nothing else in the house. Sheer beauty and scent of – honeysuckle? lemon or orange blossoms? One painting: blue sea, white shell. In the kitchen: an iron funnel over the charcoal and a row of dark-brown clay pots on the broad mantelpiece. No junk, no clutter. Only candlelight.

“Miao” – and the rattle of Babbo’s stick on the front door. He was laden with parcels, papers and envelopes sticking out of his pocket. We relieved him of the encumbrances while being kissed and gently buffeted on the cheeks. He went into his room to change and then threw himself on the orange couch. There was nothing in “his” room except two of his stools, a change of clothes and a packing-case dresser ingeniously disguised by chintz.

Mamile in the meantime prepared the tea; I laid out the cakes and was told to carry everything into her room on a low tray-table. Her room was the center of the house. After the tea ritual and some chitchat, Babbo: “She feel up to the Chaconne?”

And I heard Bach’s Chaconne, probably for the first time. It [117] registered for good. Mamile had placed the iron music stand in the center of the room and herself in front of the window. In Venice I had heard her practice for hours and had been oppressed by the sounds. I had never watched her. At concerts in other people’s houses I would glance at her now and again, but never really saw her. Now a new person stood in front of me. Was I looking at her through Babbo’s eyes? Some mix-up, exchange of perception, or fusion of vision? Or was it because she was playing exclusively for Babbo going on a long journey? Love flowing into the groove dove sta memora. “The birds answering fiddle and her between me and wisdom and view of the bay” – called to my mind, years later. For the duration of her playing I saw no shade of darkness, no resentment. The violet-blue eyes clear and luminous. Finally I had a glimpse of their true world nel terzo cielo. But as soon as the music stopped the vision came to an end. Mamile resumed her authoritarian ways and the switch to their third-person language:

In the setting sun we walked along the hill path, to the old Roman road above the new Aurelia by the sea, al Triedro and Castellaro, over to San Pantaleo, past the church to the very edge of the hill from where one looks down on the cliffs of Zoagli. All this Babbo named and pointed out to me as we walked along. We sat for a while on a low wall beneath the church, just gazing at the changing sea.

[119] The walk up to Sant’Ambrogio in the dark had something unfathomable, something fluid, almost eerie. Mamile seemed familiar with each stone, but she flashed a torch for me in spots where the sky and the sea were hidden and fireflies provided the only specks of light. In high open spaces the darkness was attenuated by the reflection from the lights in the bay and the stars above.

We had hidden a pair of old espadrilles at the bottom of the salita. – “That’s what all the peasant women on the hills do when they go into town. One can’t walk on these stones with proper shoes. After concerts I sling the fiddle over my shoulder; [120] I need both hands free to carry the music and the shoes and hold up my evening gown… Tomorrow we’ll have tea with some friends, they have a delightful garden, Else is very kind, she usually asks me to dinner before a concert, that gives me a chance to powder my nose…” Mamile was in a talking mood. After the last flight of stone stairs, under the church, we sat down for a while on a narrow bench in front of the long gray stone house at the top. – “I always have to sit down here. Gee, I am tired sometimes.”

The image clung to me: Mamile, alone on the hill path in the middle of the night, climbing with the violin strapped over her back, carrying high-heeled golden or satin shoes and a music case in one hand and holding up the long evening gown with the other. In an old pair of espadrilles. And “Gee” was all she said, after endless practicing and the walk down and climb back, alone. – “It’s awful when it rains, the violin is so sensitive.”

I knew exactly what Babbo meant when, later on, he once told me: The real artist in the family is your mother.