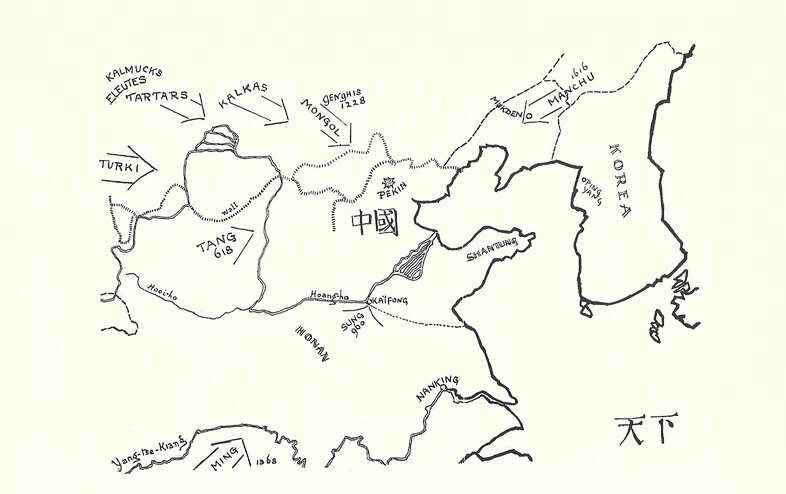 No one is going to be content with a transliteration of Chinese names. When not making a desperate effort at mnemonics or differentiating in vain hope of distinguishing one race from another, I mainly use the french form. Our European knowledge of China has come via Latin and french and at any rate the french vowels as printed have some sort of uniform connotation.

THE LESSON of Chinese history? As I can have no pretence to “potting” it here, might nevertheless be of two kinds. By implication, we might more despise and suspect the kind of education which we (my generation) received, and we might acquire some balance in NOT mistaking recurrence for innovation.

My generation was left ham ignorant, and with the exception of a few, mostly tongue-tied and inarticulate, specialists the whole occident still ignores 3000 years of great history.

We have not even heard of Tai Tsoung or of Tchin Tsoung. The America of our immediate forebears considered ideogram as a laundry check.

Our history has been parochial, not that there is any harm in studying the history of one’s own parish if one knows what one is at. But to call a book “General History”, and omit the great emperors, is as stupid as to omit Constantine or Justinian–unless it be clearly stated that one is concerned solely with men and events that have been entwined in the development of occidental institutions–the lex Romana being here pertinent to us in a way that no tale of public events, wars, shiftings of borders ever can be.

The specific lesson (1938) might be to recognize the U.S. Constitution as an innovation, and to hesitate for a very long time before scrapping it in favour of expedients and experiments oft tried and oft proved ineffective.

Fads and excesses are never new. One might note that Wu Yung in the recent Boxer times and Kung B.C. found beheading prevalent. Nevertheless the Chinese chronicle records “abolition of capital punishment”. It records a law that the Emperor shd. reflect three days in a sort of retreat, no jazz and only necessary food for three days, before pronouncing a death sentence. (Ordinance of Tai Tsoung 627/649.)

Tai cut down taxes. Tai remobilized the teaching of Kung fu Tseu. At his death the Tartar princes demanded the privilege of immolating themselves in order to serve their Lord in the next world.

That might give one perspective, datum for a custom and a conviction that stretched from the Pacific to the Mediterranean. These Tartars were prevented from observing this antient custom only because Tai had foreseen that they wd. ask to do so, and forbidden it. 1013 de notre ère Tchin Tcoung brought out a new edition of the classics and ordered their distribution.

Before thinking that old-age pensions, medical relief, educational endowments etc. etc. etc. are news, one shd. at least glance at a summary of the chinese story.

To separate what is Chinese and what Japanese needs more knowledge than I yet have or am ever likely to come by. Harakiri for high nobles is pre-Confucian. No more a Jap invention than belief in Paradise was patented by our local theologians.

The idea that orientals are men lacking emotion is more idiotic than almost any other.

We might come nearer to understanding them if we considered their admiration of impassivity to be admiration of something attained per aspera.

In any case we are in a thick fog of ignorance. Daimio, Samurai, a new Generation. Earlier Japanese poets imitating Chinese as Europeans in the seicento wrote latin.

We can blame our ignorance on no one man and on no single professor. The cutting off of England from Europe from the time of Napoleon, and the damnable stinking and pusillanimous subservience of American poor fish to second-rate and tenth-rate English opinion do not wholly excuse us.

Though their lamentable effects enter an explanation.

We have had 150 or 200 years of Chinese scholarship printed in French and/or latin and we COULD have got on with it faster.

Note on colours: green for the link to the poem; violet: link to the Companion page of a canto.