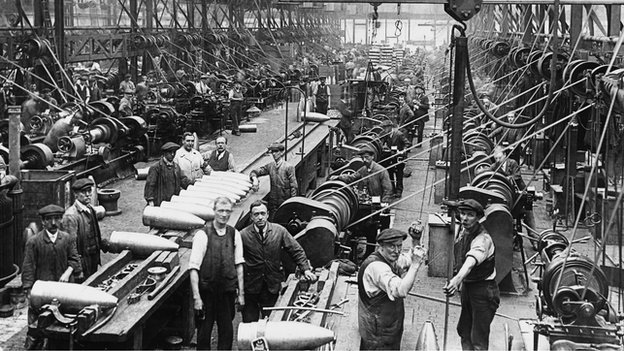 It need hardly be said that for the last century or more, the practice of governments has been to neglect internal economy; to commit every conceivable villainy, devilry and idiocy and to employ foreign affairs, conquests, dumpings, exploitations as a means of distracting attention from conditions at home, or to use the spoils of savages as palliatives to domestic sores or in producing an eyewash of ‘prosperity’. In the sense that such prosperity is useful as ‘bait’; as spectacular fortunes; as the chance of getting rich.

AN INTELLIGENT SALESMAN’S GUIDE TO THE ARMAMENTS INDUSTRY

The purchasers of armaments are Governments. The success of the business, therefore, depends upon persuading Governments to buy.

No Government wishes to spend money. Taxation is unpopular. But every Government will spend money on armaments if convinced that the expenditure is necessary for national defence.

Therefore the first things an armament firm must do is to convince Governments that its articles are indispensable for this purpose.

An armament firm produces a new type of death-dealing instrument and submits it to a Government. The instrument is costly. The Government knows that no rival Power possesses it, and turns it down.

The armament firm is not discouraged. It knows that it has only to get one Government to buy the new type of death-dealer and immediately all governments will buy. Any War Minister who neglected to order the latest weapons in use would betray the sacred cause of national defence.

So the armament firm seeks out some Government which is nervous about the arms of some rival nation. “Take this new invention,” says the firm, “and you need fear your rival no longer.”

Or the firm seeks out some small nation just launching out in armaments expenditure, with a Government or ruler who will take pride in possessing the first of a new type of armament.

It does not matter how insignificant the Government is: once get the new invention on the market and no Government will dare to be without it.

But sometimes there is a difficulty. The Governments of small nations cannot afford to buy. So comes the second principle of armament selling: Governments must be lent money if necessary. That involves a close relationship with the banks.

It will be convenient, therefore, if armament directors happen to be bank directors; perhaps the armament firm will run a bank itself to facilitate the loan. The loan will be made on conditions that orders are placed with the firm.

The next necessity in the technique of armament salesmanship is the use of Press influence. The heavy sale of armaments depends upon the state of tension in international relations. Therefore public psychology must be kept nervous. This not only involves making the Press of your own country suspicious of other countries: the Press of other countries must be nervous of the intentions of your country.

Armament salesmanship therefore requires close connection with the Press. Own newspapers if you can. Some of your directors should certainly also be directors of newspapers. Don’t be too squeamish about the truth of your stories. Publicity knows no morals. Good business depends upon war scares. Foment them!

[The canto is an] ideogram composed of what was in the news in the mind of Europe in the 1920s and early 1930s, and signifying the lack of vital intelligence in that news. The immediate effect of the passage is rather like glancing through a newspaper and registering one miscellaneous item after another—the day’s news, gossip, titbits of interest, information both relevant and useless, opinions informed and misinformed, sheer silliness—all are indiscriminately thrown together. The news that the Italian marshes have been drained at last is buried in a brief item, with no thought given to how it was done or what it might signify. Gandhi’s revolutionary thought, “if we don’t buy any cotton/ and at the same time don’t buy any guns,” receives no more attention than the soap and bones dealer’s precisely wrong assurance, in May 1914, that there would be no war […]

In all that heap of news one looks in vain for a European paideuma to set alongside Jefferson’s American paideuma, for a sense of values held in common, for some basis for constructive action beyond the business of making money from guns. And one looks in vain for what Pound clearly considered the most vital news, first, Douglas’s potentially life-saving and civilization-saving revelation of the economic cause of depressions and wars, and then intelligence of the war against humanity being carried on by the military-industrial complex. There is the ironic suggestion that the Africans who ‘spell words with a drum beat’ may be more efficient at getting their message through.

HELL CANTOS: XIV and XV [capital, politics and the press - the British case]