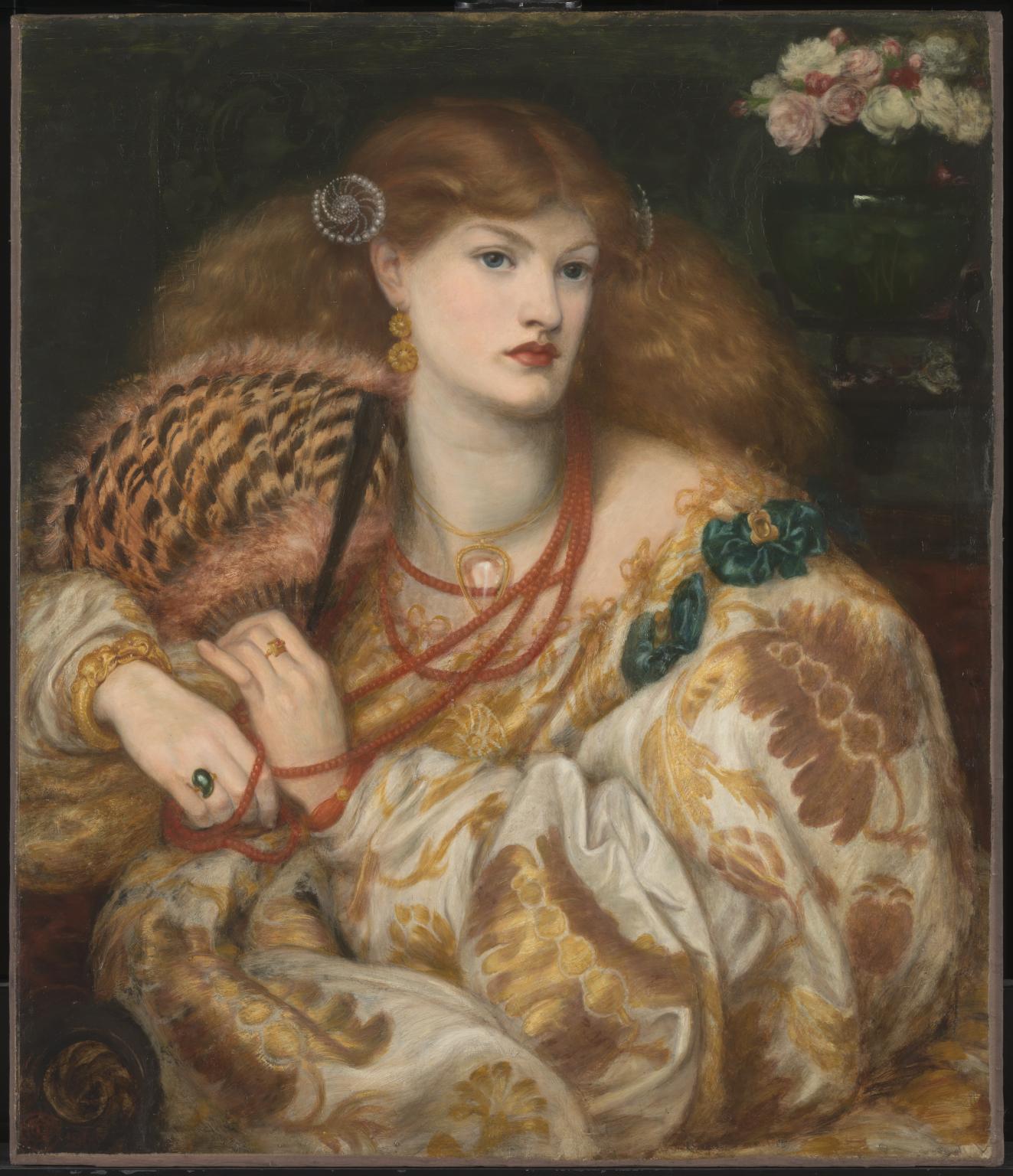 Apart from the welcome given to or withheld from a fine performance, it seems to me that the vogue of Guido’s canzone, Donna mi Prega, was due to causes not instantly apparent to the modern reader. I mean that it shows traces of a tone of thought no longer considered dangerous, but that may have appeared about as soothing to the Florentine of A.D. 1290 as conversation about Tom Paine, Marx, Lenin and Bucharin would to-day in a Methodist bankers’ board meeting in Memphis Tenn.

The teaching of Aristotle had been banned in the University of Paris in 1213. This prejudice had been worn down during the century, but Guido shows, I think, no regard for anyone's prejudice. We may trace his ideas to Averroes, Avicenna; he does not definitely proclaim any heresy, but he shows leanings toward not only the proof by reason, but toward the proof by experiment. I do not think that he swallowed Aquinas. It may be impossible to prove that he had heard of Roger Bacon, but the whole canzone is easier to undestand if we suppose, or at least one finds, a considerable interest in the speculation, that he had read Grosseteste on the Generation of Light. 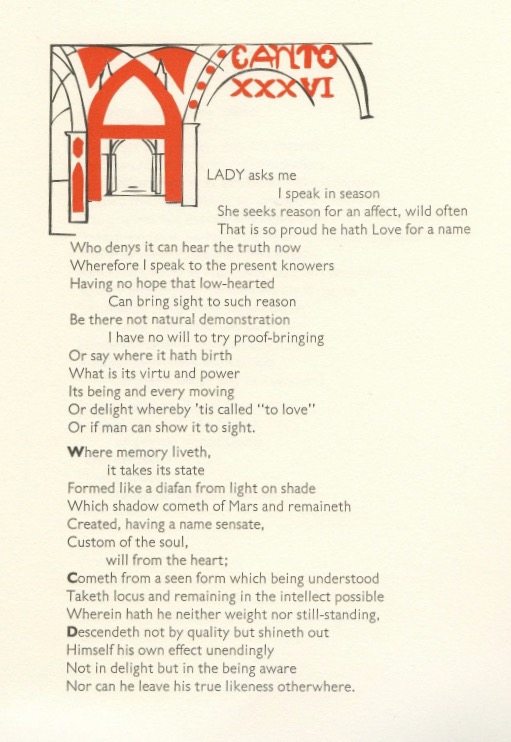 From September 1927 until the end of 1931, Pound was on and off involved in the research for and misadventures of a cherished project, an edition of Guido Cavalcanti’s poetry, which was to include Italian originals with textual notes, reproductions of manuscripts, and his own essays and translations. After Faber gave up on the book in January 1929 and the Aquila Press died on it in the summer of 1930, the project was finalised as Guido Cavalcanti Rime and published at Pound’s expense by the Marsano Publishers in Genoa in January 1932. (See Pound-Cavalcanti Chronology for details). Rime included a first version of Guido Cavalcanti’s canzone, “Donna mi prega,” which Pound had published in The Dial in July 1928, in advance of the book.

By October 1931, Pound told Dorothy that he had “material” for canto XXXVI; this might be rephrased as saying that he knew what he wanted to do with the canto, had material for it, but had not yet started writing it. This he would do after the Rime edition was finalized and published. Due to similarities between the structure of the canto and the libretto of Pound’s opera Cavalcanti, on which he worked in the summer of 1932, we may assume that canto XXXVI and the opera were explorations of the same material in two different arts done in quick succession. This bespeaks of Pound’s conviction that Donna mi prega was made to be sung and that a true revival of the poem would have to work both in poetry and music (LE 163, 167). As Charles Mundye observed, “the music serves to reintroduce and expand the formal scope which was lost when the poems of Cavalcanti were consigned to their silent life on the page” (ECEPA 418). Both the opera and the canto include the Italian troubadour Sordello, whom Pound places as a possible link between Provençal poetry and the dolce stil nuovo of Cavalcanti’s and Dante’s generation.

On 6 November 1932, Pound wrote to Étienne Gilson that he had written a second, better English version of Cavalcanti’s “Donna mi prega” than that contained in Rime. This was integrated into Canto XXXVI, which he then gave to his wife Dorothy to illustrate by December 1932. The canto was then published in periodicals: The Harkness Hoot in April 1934 and The Criterion in January 1935. It was also published by Farrar & Rinehart in America in the volume of Eleven New Cantos on 8 October 1934 and by Faber in Great Britain on 14 March 1935 (Gallup 53-4).

I am grateful to Mauro Piccinini who gave me access to his own copies of the Pound’s correspondence with his wife Dorothy for the period 1928-33 (Roxana Preda, March 2019).

My Cavalcanti [Rime] nearly ready. I don’t know whether you can put me through to yr. Romance dept. or in fact any part of Univ. dealing with polyglot letters. The edtn. ought to serve as START for a new method of handling international texts. I want names both of men who can do the work, and of “powers” capable of assisting. Having (that is to say all but 4 pages) got through with the Cavalcanti in spite of all the devils in Eng. or Am., I am in stronger position than when merely having something of my own that “wanted doing.”

Don’t feel I can do a lik more at the opry till after Milan anyhow, & wd. rather do some Cantos before I go over it again.

I see no chance of working with Agnes in Rap. before Feb. [...] I want to clear my head and come back to the Guido from the outside.

Note: Pound had finished the opera Cavalcanti in the summer and autumn of 1932. From London, Dorothy asked whether he was ready to work again with Agnes Bedford to settle details of musical composition. Pound’s response suggests that he had finished working on the opera for now and was ready for a new approach to Cavalcanti, that of retranslating “Donna mi prega” for canto XXXVI.

Your review of Cavalcanti [Pound’s edition, Guido Cavalcanti Rime, Genoa: Marsano 1932] has just reached me, hence the delay in answering; […]

The translation //// I suppose, as usual, I left too much to be implied. I meant the translation to attract, and to convey the general impression that the Canzone was IN THE FIRST PLACE a poem. I knew, and thought I had made clear, that it was inexact, as translation. Have since made what I hope is a better one, both as poem and as sense.

I didn’t mean to imply that my interpretation of Guido (character etc.) cd. be proved by the isolated text of Donna mi prega but that, taking that poem with the others and with Papa Cavalcanti down in the burning tombs, etc. one had more or less the right to try the line of conjecture indicated.

I want the Madonna photos of Or San Michele and the interlacing arches on the outside walls. anything almost might be useful for the G. Cav. canto Cap.

Here you are a Ware that canotetoes cantose would have been acceptable in the Mortuary [Eliot’s magazine, The Criterion] A Quarterly Review at any time but you never offered any on the contrary you said etc of course that was some time ago but why should not a intelligent man change his Mind Im askin you not sure about room in September but send it along one at a time one at a time or perhaps two in any case at this Rate the choirs where late the etc will be bare and Ruined before the book comes along so send some along send them along Before the fall of the Leaf  Shall I go to Social Credit at bracing Skegness or not that is a Question […]

Note: Eliot is riffing on lines in Shakespeare’s Sonnet LXXIII: “That time of year thou mayst in me behold/ When yellow leaves, or none, or few, do hang/ Upon those boughs which shake against the cold, / Bare ruin’d choirs, where late the sweet birds sang.”

“Erritatin” – Frank Morley from Faber had given Pound a copy of F. D. Roosevelt’s book On Our Way. Pound wrote a review for the Criterion, but Eliot intimated it was too long. In an undated letter, Pound retorted: “Yerr a niritatin little kuss/ why don’t you say what about that rev/ of Frankie […] if you had said 900 words for Frankie/ you wd/ prob have got 900.” (L/TSE 7: 289n)

“no plausibility of the book” – The Eleven New Cantos was going to be published at Faber, but Eliot had not yet received the manuscript, so he still had time to print a canto in the Criterion in advance of the volume. Pound sent Morley a set of spare proofs from Farrar’s American edition the next day. After reading them, Eliot chose canto XXXVI for the Criterion. See entry on 11 October below.

Eleven New Cantos is published by Farrar in the U.S. on 8 October 1934.

still possible to print Canto in Same number I Think, I shall pro-propose to print no. 36 I think it is because I am afeared that that about Jeff and John Quincy might frighten off the publikum which is not yet being acquainted with niceties of American history; and will send rest to Orage asking him to return BUT Is this the Copy WE ARE SUPPOSED TO SET UP FROM???

Crit[erion]/ to print 36 whichever thet iz/ as Psm [T.S Eliot] fears effek of murkn histry on Brutish iggurence. I tole him to print what he d/n well pleezez. I mean what pleeze him not ez. Anyhow; any Canto, wd/ be a honour to his bloody morterarium. an thass that.

yes, yes darrling, you said it

an the Possum sez he izza print a Canto, in Dec/

A Draft of Eleven Cantos is published by Faber in London on 14 March 1935. 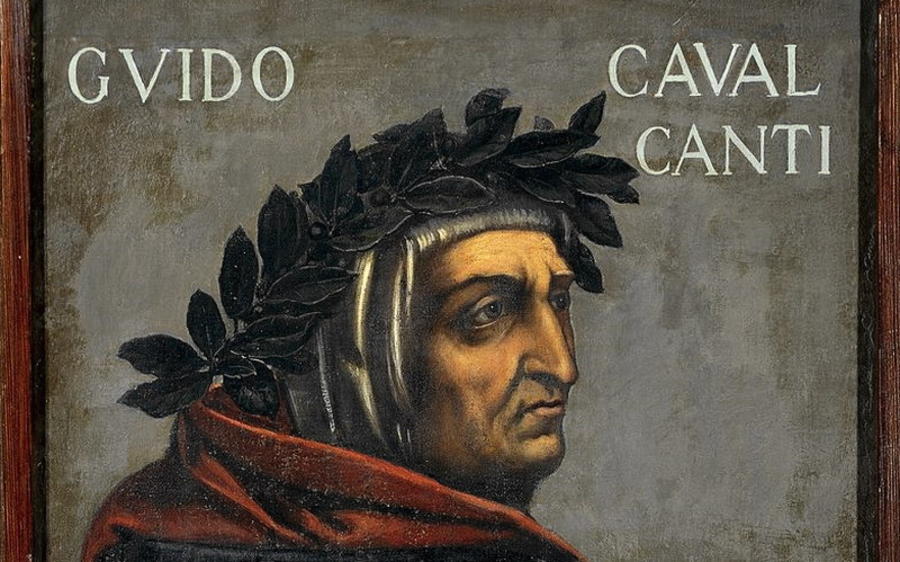