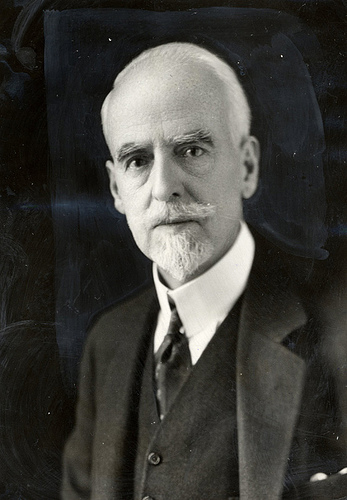 The Allied victory on the Marne was more than a military success. In destroying the legend of German invincibility it gave hope to the subject peoples of Central Europe, the Czechs and Slovaks, the Southern Slavs, the Transylvanian Rumanes, and the Austrian Poles. These peoples, technically enemy, were in reality supporters and well-wishers of the Allies; and in all Allied countries it became a question of distinguishing between them and enemy peoples proper. Very early in the war I was consulted by the Chief Commissioner of Police, Sir Edward Henry, upon the best way of dealing with such of those “alien friends” as lived in London; and I suggested that trustworthy committees of Czechs, Poles and other races subject to the Hapsburgs, should be formed to examine and answer for the Czecho-Slovaks and Southern Slavs of Austria-Hungary, the Poles of Austria and Prussia, and the Italians of Austria. Some provisional arrangements on these lines were made; and I was brought into touch with the “National Committees” formed in accordance with them and, in particular, with the Czechs “National Committee” of which the chairman was a restaurant-keeper named Sykora, and the secretary an illuminator and painter of miniatures named Francis Kopecky. They were honest, simple folk, in- [42] tensely grateful for advice and help, and unaffectedly patriotic.

One afternoon, towards the middle of September, when I was about to leave my house, I found a strange-looking man standing on the threshold. Thick set, of medium height, unshaven, grimy in appearance and in dress, with features of the semi-Tartar type that is not uncommon in Bohemia, he seemed an unprepossessing fellow.

“Are you Mr. Steed?” he asked, with a strong foreign accent and a pronounced American intonation.

“I have a message from the Professor.”

Voska came in and began: “I’m Voska, the head of the Bohemian Alliance in America. I am an American citizen.”

“Where do you come from and when did you see the Professor?"

“I left Prague with thirty American citizens five days ago. In an hour I must catch my train to Liverpool with them. Before I left, the Professor said to me: ‘In London, see Mr. Steed. Tell him the Russians shoot at our boys when they want to surrender. Our boys wave handkerchiefs but the Russians shoot all the same. Tell Mr. Steed to find means of stopping it. Our boys want to go over to the Russians.”

“How on earth am I to stop it?" I asked. “Did Masaryk say nothing else?”

Here, I thought, is a pretty business. Masaryk would certainly not have sent to me any man whom he did not trust. But Voska’s appearance was the reverse of prepossessing. He explained, however, that he had been travelling night and day for five days, that he had been unable to shave and that he had slept little because, on his way through Germany, he had kept careful note of all the German guns and troops he [43] had seen going westwards. He had made a list of them and had concealed it in the heel of his boot.

I asked him what he did in America and whether he knew any of our people. He said he had been expelled as a youth from Bohemia for advocating Socialist doctrines and had gone to America where, for a time, he had edited a Czech Socialist newspaper. Then he acquired an interest in a Kansas marble quarry and had made a small fortune which he was devoting to the organization of the American Czechs in support of the Allied cause, since the freedom of Bohemia could come only through an Allied victory. He wished to know how long the war would last. I told him that Kitchener and Northcliffe thought it would last at least three years. Voska, or one of the London Czechs, found means to inform Masaryk of those opinions which, as Masaryk afterwards told me, had a decisive influence upon Masaryk's activities. They convinced him that, in three years, there would be time to work seriously for the liberation of Bohemia.

Voska's tone was so earnest and his language so simple that I gave him a note of introduction to the Washington correspondent of The Times through whom he presently got into touch with the British Naval attaché, Captain Gaunt. When he had gone, I sat down to think out ways and means of doing what Masaryk wanted.

I thought of the scene at Prague in June, 1912, when I had stood by Masaryk’s side while the assembled Sokols of all Slav races sang the “Hei Slovane.” I remembered that Masaryk had criticized the jingo tone of the Czech words, and that the Poles sang to the same air their song, “Poland Is Not Yet Lost.” The chief thing was that all the Slavs knew the air. If the Czech troops who might wish to surrender to the Russians were to sing the “Hei Slovane” at midnight in their trenches, the Russians might be warned to take the singing as a signal. The singing of the “Hei Slovane” by the Czechs would not necessarily arouse suspicion in the Austrian Army, because it was the favourite Czech song. In any case, this was the only expedient I could conceive.

But before it could be employed, a message would have to [44] be sent to Masaryk–no easy matter. He would probably be under police observation and all his correspondence would be censored. A messenger must be sent, and such a messenger as not to arouse suspicion.

The only people who could find him would be the Czechs of London. Therefore I applied to my acquaintances Sykora and Kopecky. They came to The Times office towards midnight–the hour they always preferred–and after some consideration they thought they could find a messenger. A few days later they produced him–a sturdy little hunchback, with a magnificent hump, whom no Austrian would dream of claiming for the army. He was an Austrian subject liable to repatriation, and was ready to go to Prague out of “patriotism,” though not the variety of patriotism which the Austrian authorities favoured. I catechized him severely, and when satisfied with his trustworthiness, repeated to him in English and in German, until he knew them by heart, the following instructions. “Find Professor Masaryk. When you are alone with him, but not before, say ‘Steed says the boys must sing “Hei Slovane” at midnight.’ Forget this till you are alone with Masaryk and forget it afterwards.”

As a matter of fact, the hunchback did not carry that message. Another equally devoted Czech turned up in London on his way to Prague and took it. When he had started I went to Count Benckendorff, the Russian Ambassador, told him the story, and asked him to send to M. Sazonof, the Russian Foreign Minister, who had once been my neighbour in Rome, a request in my name that instructions should be given by Russian headquarters to the commanders on the Russo-Austrian front that, if the “Hei Slovane,” or “Poland Is Not Yet Lost,” were heard at midnight on any part of the front, it would mean that Czechs were coming over into the Russian lines and must not be fired upon. Count Benckendorff telegraphed the message and there, as far as I was concerned, the matter ended.

It had, however, a sequel in 1918. At that time some of the British Labour leaders felt their knowledge of foreign affairs to be somewhat inadequate, and they asked me, Dr. [45] Seton-Watson, Professor (now Sir) Bernard Pares, and others, to dine with them from time to time and to answer the questions they would put. They did not wish to be preached to but only to extract from us such information as we might be able to give. At one of the first dinners they asked questions about the Czecho-Slovak Legion which had been formed in Russia by Masaryk after the revolution of 1917 and was then marching through Siberia towards Vladivostok. I gave them a general account of the Czechs and the Slovaks and referred them to Dr. Seton-Watson for more minute particulars. These he proceeded to give until Bernard Pares (who had been British “observer” on the Russian front during the early part of the war) interrupted impetuously, saying:

“But all this gives you no idea of what splendid fellows these Czechs are. When I was on the Galician front in the winter of 1914-15, I was awakened again and again, between one and two in the morning, by batches of them who had been taken prisoners, marching through the camp and singing at the top of their voices. Notwithstanding the bitter cold and the early hour, they were as merry as crickets.”

“What were they singing, Pares?" I asked.

“The funny thing is that they were singing a song that was forbidden in Russia “Poland Is Not Yet Lost” he said.

“That is interesting,” I answered. “Now let me tell you the other end of the story.”

How many of the Czechs and Slovaks in the Austro-Hungarian Army went over to the Russians under this arrangement I do not know. They may, at first, have been only a regiment or part of a regiment; but, as the war went on, the movement spread and affected not only the Czecho-Slovaks but the Southern Slavs who eventually formed a legion of their own in Russia. I know only that my message was delivered to Masaryk and that Masaryk passed it on. But, until very recently, I had little documentary proof to substantiate my recollections. A few months ago, however, President Masaryk wrote me that he had completed a volume relating his activities during the war. He added, “It starts in September, 1914, when I sent Voska to you. That was the beginning.” [46]

In October, 1914, I received a further message from Masaryk, by way of Holland, to say that he would be at Rotterdam towards the end of the month and wished to meet me or Dr. Seton-Watson there. As it was impossible for me to go then to Holland, Dr. Seton-Watson went instead, met Masaryk, and returned with a general indication of his policy of which he informed me and the British Foreign Office. Few understood at that time the importance of Masaryk’s work or his unique ascendancy over the Slav peoples of Austria-Hungary. Most British public men thought it a hare-brained business to take serious account of him or to suppose that an isolated Slovak Professor at Prague, who must be suspect to the Austrian Government, could render valid service to the Allied cause. Even the strength of the Czecho-Slovak national movement was not understood. Were not the Czechs and Slovaks tightly wedged in between Germany and Hungary, with ten million Austrian Germans on their flanks? Among prominent British statesmen only the late Lord Bryce fully grasped the potentialities of the position. The rest of us were comparatively obscure and unknown folk. But we knew enough to be sure that we were on the right road, to have strong faith in the Austro-Hungarian Slavs, and to comprehend the essential fact that there could be no Allied victory without the discomfiture of the Hapsburg Monarchy.