From Confucius back into the intricacies of the modern world and its revolutions. I was started in the middle of canto 27.

refers to the warriors of the Cadmus legend, the five who survived of those who had sprouted from the teeth Cadmus had scattered over the ground — the teeth of a monster he had killed with a stone.

And that tovarish cursed and blessed wihout aim.

When the second half got into the flowing stage, I could start at the beginning of the Canto: “Observed that the paint was — refers to one of Kipling’s naval reports.” And they elected a Monsieur Brisset — a damn country boor, intended to be a poet and they got him to Paris, all sorts of attentions and honors and I was passing through Paris at the time...”

SIENA CANTOS - the constructive will of a community 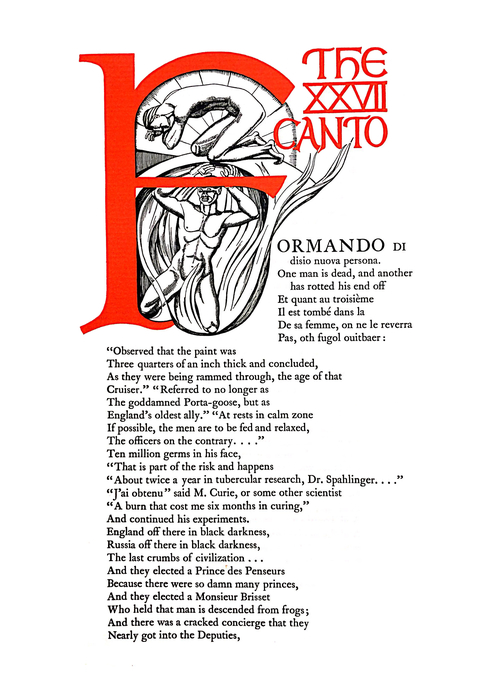 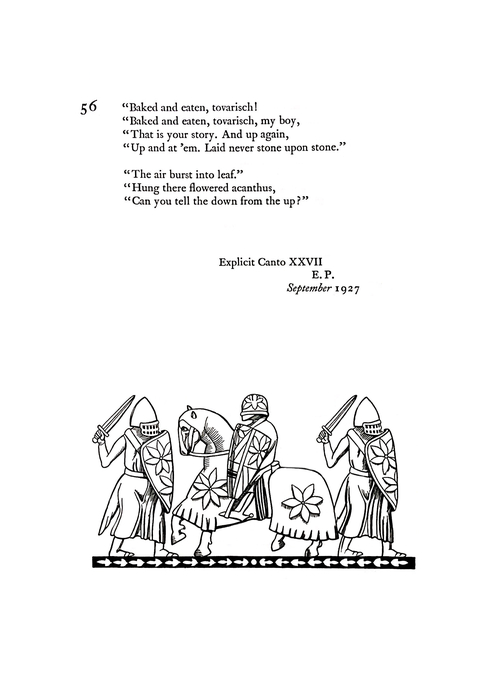 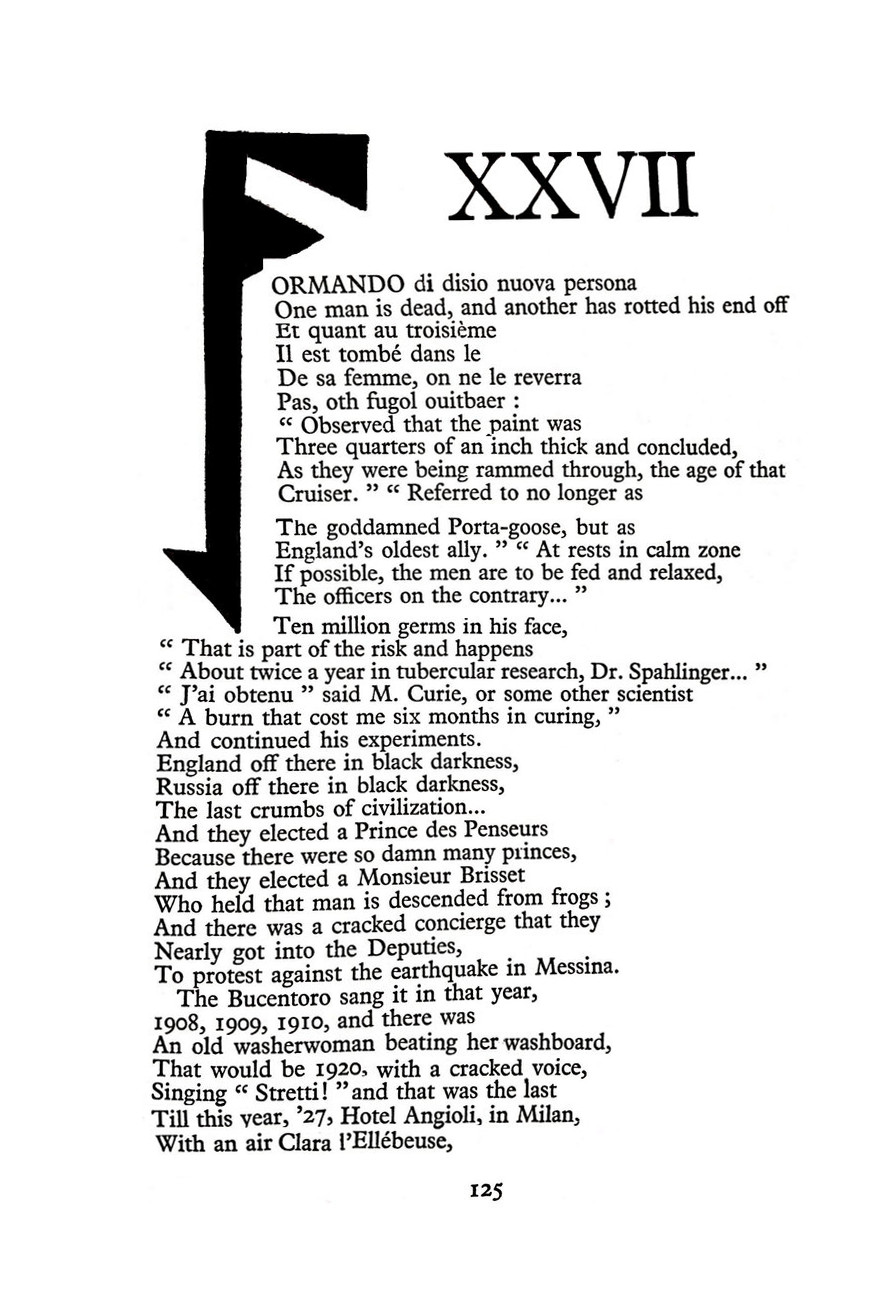 As shown by the Calendar, Canto XXVII as written between 8 June and 11 September 1927.

He has done one canto & got idea for another. Bunch of Grigioni documents re medicos in Quattrocento to go with one I have had a long time & that don’t fit anything else. [26 done and idea for 27]

Olivia has Eden book – so I’ll arrange with John and Gladys Haynes to see it… will write John immediately.

She had roused up Bunting, & he had written her lots of information on “Geryon”

Canto 27. has gone toward the printer, who says the paper for book is sposed to be on way from Italy to London.

Am blocking in cantos 28-30 but they wont affect the present volume.

This is to acknowledge receipt of the last CANTO which will go in to the body of the book.

It is impossible for me to accept an award except on Cantos or on my verse as a whole.

It would also be foolish, I think, to send in a prose squib or a criticism of some Whifflepink like friend Morand. There has been no definite request for Cantos, but there is no other verse available, and will be none. The available detachable sections are Canto 22 and the part of 27. XXII is probably too frivolous for your purpose. I suggest that you use the XXVIl by itself; it will take less room and probably cause less friction. It is also possible to take the Gibraltar fragment, by itself, from point beginning “And a voice behind me in the street” on page 17 (or red 3).

As the immediate appearance in the Dial is largely a formality perhaps the XXVII will serve.

Have had 3 canti to correct in proofs.

And tovarish lay in the wind /

[“The article [by T.S. Eliot that Berti had inquired about] was published in the Dial in January 1928 / preceded by a part of my canto XXVII / canto of the Russian revolution / or epitaph of revolution / among the better ones; or at least for me one of the most beautiful. And if you’d like to translate something more, keep it.

“Nothing we made and we set nothing in order” // tovarish = comrade. Destiny of the poor devils who did not understand anything. It would be timely for the fall of Stalingrad and was written naturally, in 1927, or before. Begin at page 136/ line 3.

And tovarish lay in the wind /

The first half of the Canto is not translated / to conclude / if you don’t make a complete edition of the cantos / this is what may have prevented you from trying it. / The second part can stand alone as a complete unit / two pages.”]

Notes. The date and wording of the letter show that Pound assumed the German army would defeat the Soviet forces in the battle of Stalingrad, which was raging at the time. In October 1942, it certainly looked like the Germans were winning. However, Soviet reinforcements poured in and the German army was forced to retreat defeated in February 1943, after a battle which had lasted more than five months. The “poor devils” and “baked and eaten tovarish” had a force and a resilience that Pound had not expected, either in 1927 or in 1942. The Battle of Stalingrad and the light it throws on the cantos through this letter reveal the limits of Pound’s political opinions and inclinations, his dismissal of Russian culture and his inability to accept the  strength of the Communists to unify a nation.

“was written naturally, in 1927, or before” – Pound may have implied the overlapping of canto XXVII with the shortage of grain in 1927 in the Soviet Union and Stalin’s policy of “dekulakisation” i. e. of forceful confiscation of grain reserves from richer farmers and their deportation to the gulag. The collectivization of agriculture began in 1928, together with the first Soviet five-year plan. Wikipedia. 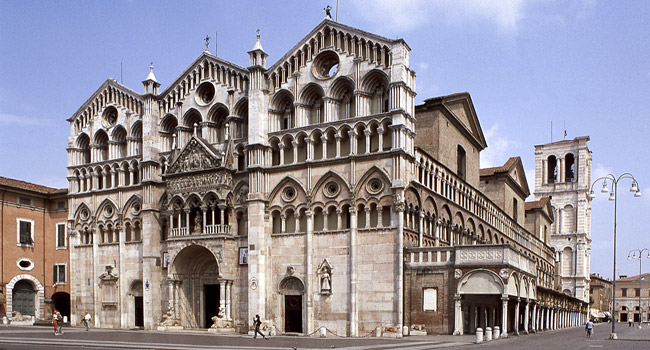