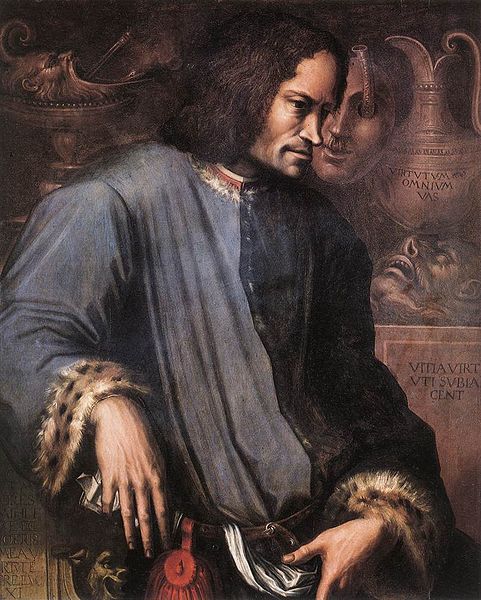 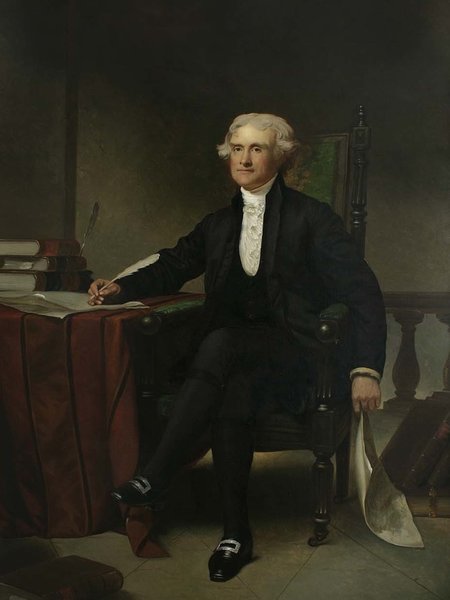 Great art does not depend on the support of riches, but without such aid it will be individual, separate, and spasmodic; it will not group and become a great period. The individual artist will do fine work in corners, to be discovered after his death. […] Great art does not depend upon comfort, it does not depend upon the support of riches. But a great age is brought about only with the aid of wealth, because a great age means the deliberate fostering of genius, the gathering-on and grouping and encouragement of artists.

For if Rome was a conquering empire, renaissance Italy evolved the doctrine of the balance of power, first for use inside the peninsula. Italy produced notable peacemakers who based their glory on peace tho’ it came by the sword, Nic. Este, Cosimo, Lorenzo Medici even Sforza condottiero, all men standing for order and, when possible, for moderation.

CANTO XLVII [nature and the divine] 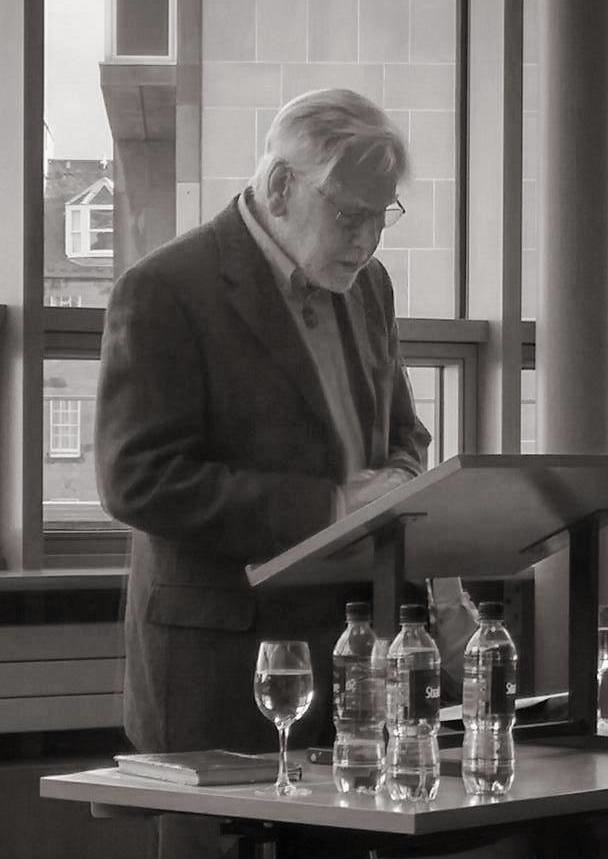 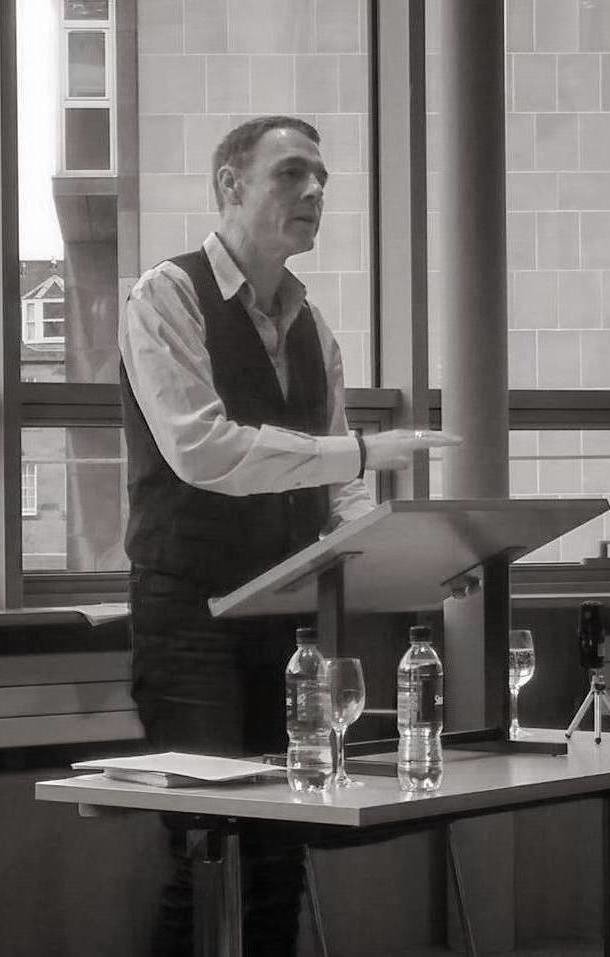 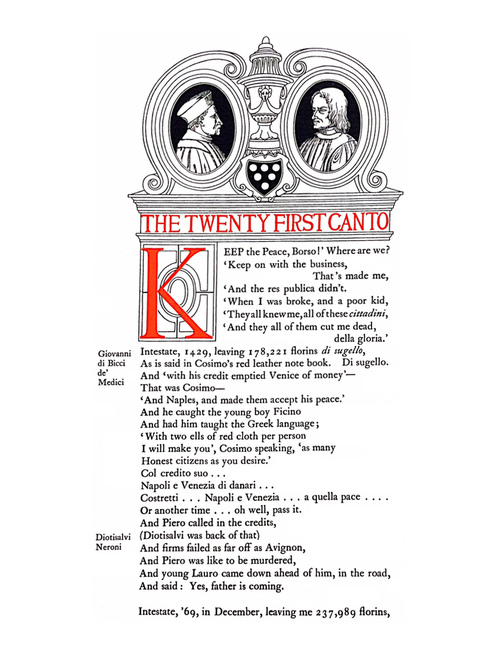 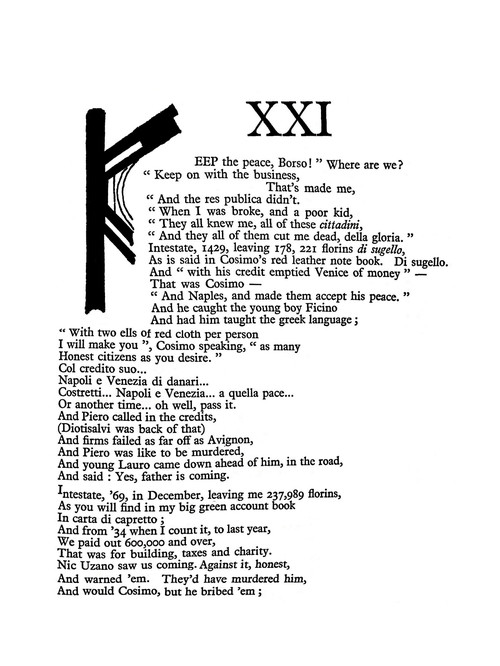 I thanked you for the Jefferson in a letter some time ago, and thank you now again. They arrived beautifully packed and in perfect order, and are now on my shelves.

Note: TSE acquired The Complete Works of Thomas Jefferson on his father's death in 1919 (L/TSE 2: 401). As evident from Pound’s letter to his father below, Eliot gave the volumes to Pound straight away.

Have done cantos 5, 6, and 7, each more incomprehensible than the one preceding it; dont know what's to be done about it. [...]

Have been reading works of Thos. Jefferson [...]. Wider knowledge of T.J.’s life and opinions would be a good pill for the Murkhn Peepul; however the little school text books will probably go on telling the little lies some swine thinks ought to be told to the unfortunate young.

It is a great pity that Th. Jefferson is not taught in American schools.

This note mainly to ask if you know any thing about American Presidents - I have what I need on Wash. & Jefferson but that's about all. - I don’t care a damn about their public eye wash. I want facts indicative of personality.

Is there anything in yr. old vols. of Grant’s Life. - or Blaine’s ‘20 years of congress.’ - or did you pick up anything when you were in Washington or from T.C.P. that threw any light on Garfield - Arthur - G.C. - or whomever happened before Garfield. Lincoln?? (forget dates. Johnson, Grant,?? Hayes. - Garfield - forget if there were any others. -

Can you look over books in Phila library. -

Jefferson’s letters I have read. He was probably the only civilized man who ever held down the job.

(of course it is now accepted that Lincoln was J.Xt & not human. - so I’m not counting him.)

Tyler - Harrison lst possible Monroe. might be the brighter spots in the annals of national bad taste.

I can’t remember the names of a lot of ’em. There was a Johnny named Polk & two bums called Adams// anny how it wd. be more interesting for you to read such of their correspondence as is printed - than to read the pollyanay de nos jours -

I believe Grover has written his own life - but suppose the book’s bunk & designed to tell the young to be industrious.

Any how the earlier occupants are more likely to be interesting.

On the contrary, it is possible that Ezra may curse me. To the best of my recollection the complete works of Thomas Jefferson were left at Holland Place Chambers. Ezra had them for a long time and I think that when he went to Paris, we had some discussion as to whether he should return them to me. There are a great many volumes and my flat was already filled with books, so I think that he agreed to store them for me. At any rate I have not got the Jefferson now and I think that you will find them at Holland Place Chambers.

Re executives, I have one or two plums. Geo. W’s death – Jefferson trying to get a gardener who cd. play the french horn in quartette after dinner. (wanted to import one along with a clavicord) Shd. like something of the Lincoln family that hadn’t been worn to death & that didn’t feature J. Christ too heavily – also Grant.

The row of duds begins early with Mr. Adams.

Have found the ten vols. of the good Jefferson in two brown paper parcels on shelf over front door! Am glad to have tracked them down. That will have to wait until Sept. when either O.S. or self will look up – Tell me again what you want beside the French horn gardener.

I feel Jefferson deserves yr notice! But imagine that he will go into Cantos (& be the more pleased)

In the Jefferson I want his account of Washington’s sidestepping the question about Xtianity. I think you might bring back a few vols, and let me read em in Italy. There shd be room for em in the box. Must stir up the box maker.

Bring a few vols, say 3, of the letters. If not too much trouble.

The Swinburne vol is I think the 2nd, Poems and Ballads or possibly the 1st.

My Laus Veneris seems to have most of the 1st pans b in it.

Anyhow I shd like yo take another vol of S away with me.

I will buy then (I will verify) vol II of Swinburne containing translations & hunt up the Rossetti “Neiges”. I can’t possibly bring over any Jefferson, as my luggage is reduced to one suit-case: but I’ll post them to you.

Have done a little more canto.

It is the Jeff. correspondence, not the FREE PRESS that I want. Thanks for the Wash. matter.

As you say U.S. presidents do not present ALL the features required for the full mind. Am using a bit of Jefferson in the XX or thereabouts.

Have sent Dad two cantos; and done more, not yet in shape to send. Am, as I possibly wrote him, ready for another long chunk; and trying to find some bhloomin historic character who can be used as illustration of intelligent constructivity. Private life being another requisite. S.M. amply possessed of both; but other figures being often fatally difficient.

Have done a little general reading for a Florentine canto. If . that is to say . reading with an idea to their being Florentine cantos if the facts warrant or possible a canto – singular if they dont.

Oh well. I still hope that no democrat will ever sit in the Whitehouse.

But I wish the’d make Tom Jefferson’s works compulsory in the schools [...]

Very hard to get a just formula: BUT if the res publica means anything at all it ought to mean “The Public convenience.”

that is what Jefferson and Co, tried to make it mean. And no nation has ever so betrayed itself  (save possibly in a complete collapse under invasion) in so short a time as America during the past ten years. 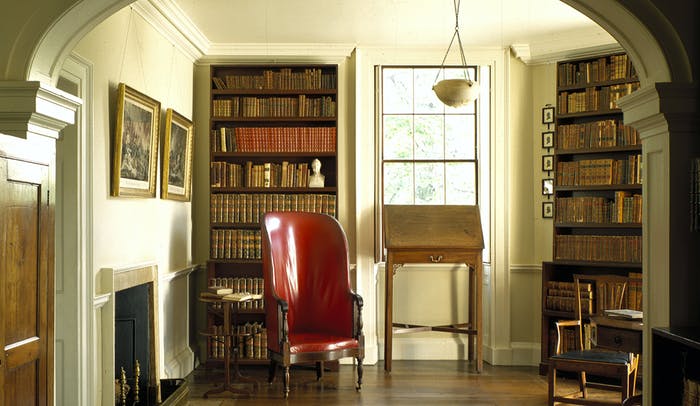