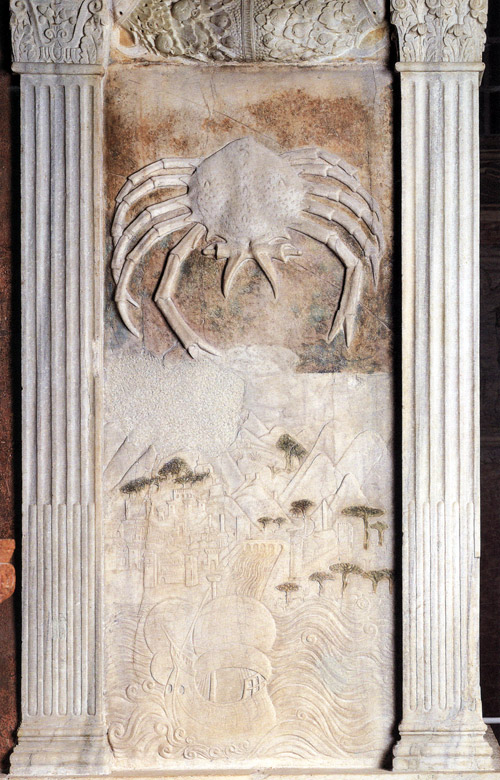 The canto chronicles the last years of Sigismondo’s life, 1461-1468, and connects to the event told at the end of the previous canto: the battle at Nidastore in 1461, Sigismondo’s last military victory. Unfortunately for him, Pope Pius was not prepared for peace: on the contrary, he increasesd his efforts to destroy Sigismondo. The public  indicment and the burning in effigy, told in canto X, were Pius's propaganda efforts to annihilate Malatesta and happened after Nidastore (See Timeline). In the next year, 1462, Malatesta lost the battle of Senigallia and the Angevin alliance was also defeated by Ferdinand of Naples. Sigismondo now lacked money to continue the war and trusted in the intervention of Venice, Milan, and Ferrara to curb Pius’s fury. It was Venice which finally stopped Pius from destroying Malatesta by making the peace with Rimini the precondition of the Venetian participation in the war against the Ottoman empire, Pius’s most important political project. By the peace of October 1463, Sigismondo was deprived of all his territories and left only with Rimini, which he was allowed to rule until his death.

Pius died a year later and Malatesta, now in the service of the Venetians, was sent to Morea (Peloponnese, Greece) to fight against the Ottomans, who had conquered Constantinople in 1459 and were now in the process of occupying Greece. After Sigismondo was recalled back in 1466, he found that the new pope, Paul II, would not even consider his service against the Ottomans as an argument for returning at least a part of his dominions. On the contrary, Paul sent an envoy to propose that Sigismondo give up Rimini to live in a lesser town. Frantic, Malatesta went to Rome to assassinate the pope. Paul, suspecting his intentions, received him in the company of seven cardinals, and Sigismondo, falling to his knees, implored him to consider his family’s service. The pope gave up the idea of taking Rimini away and hired Malatesta in the papal service with 64 lances and 8000 ducats a year, a pittance and a final insult, which Sigismondo now had to accept.

The canto ends on a humorous note, as Pound eludes a tale of hopelessness and destruction – we see Sigismondo at his most personal, at his home in Rimini, with friends, at play.