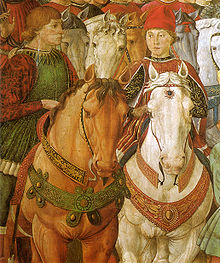 Canto VIII is in many ways a preamble to the Malatesta sequence. It is a more general portrait of Sigismondo and provides a justification of Pound’s interest in him. Sigismondo’s primary occupation, that of a condottiere (military commander for hire), is presented as almost "an interruption" from what Pound regards as Malatesta’s most important cultural service, that of being a patron of the arts and building the Tempio Malatestiano. As Pound says towards the end of the canto, while other condottieri, like Francesco Sforza, were busy making war and switching alliances, Sigismondo “templum aedificavit” – he built the temple. Without it, Sigismondo’s name would be just an item in a genealogy, a grain in a neutral historical record. But by building the Tempio, he “cut his notch,” he left behind his record of struggle.

Canto VIII shows how in his little town in Romagna, Sigismondo was a lord on the model of the Medici, the Este and the Gonzaga: he was a military man, but also a patron of the arts; he wrote poetry and organized splendid festivities; he made military alliances and participated in the most significant political events of his time. At the end of the canto, Pound starts relating the events of Sigismondo’s youth up to the time he took up the signoria of Rimini in 1432, his struggle to assert his leadership against the challenges of his own family and the pope. After that, “he crossed the Foglia,” like Julius Caesar had crossed the Rubicon: there would be no turning back.