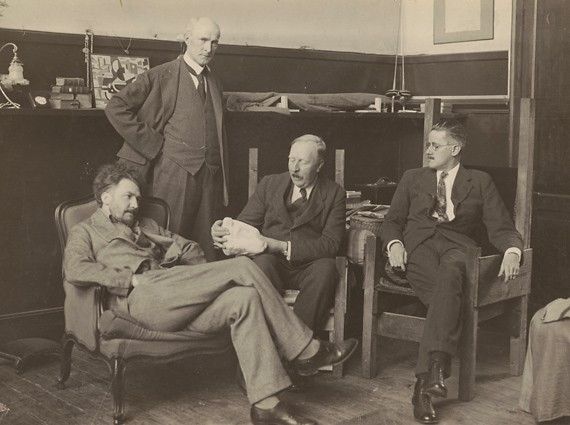 Ezra Pound, John Quinn, Ford Madox Ford, and James Joyce gathered in Pound's Paris studio on 12 October 1923 to discuss the creation of transatlantic review, the literary magazine where canto XII was published for the first time.

In Canto 12 copper, the Homeric oricalc, reappears in the form of little copper pennies. This Canto consists of three fiscal parables, two long ones grouped round a short one. The first long parable is the story of Francis (Baldy) Bacon, whom the young Pound had met in New York and the middle-aged Pound kept in touch with till the 1940’s, another tricksome Odysseus who had discovered that currency might be something to monopolize. He bought up all the little copper pennies in Cuba and released them again at a premium. They were public centavos, but Baldy had the supply cornered. The other long parable is John Quinn’s Tale of the Honest Sailor, who rose to the ownership of a “whole line of steamers,” all the time supposing the boy he was bringing up had sprung from his belly, begotten by “a rich merchant in Stambouli.” This misapprehension rhymes with the sentiments of the bankers to whom Quinn is talking, bankers who invest

And not likely to ease distribution,

and suppose (“quintessential essence of usurers”) that some natural process increases the amount of money they share. So usury rhymes with sexual perversion.* The unobtrusive story, between these two, of the Portuguese whose great fortune was founded on the natural increase of little pigs, anticipates the story (Cantos 42-43) of the Bank of Siena whose base of credit was

the abundance of nature

with the whole folk behind it 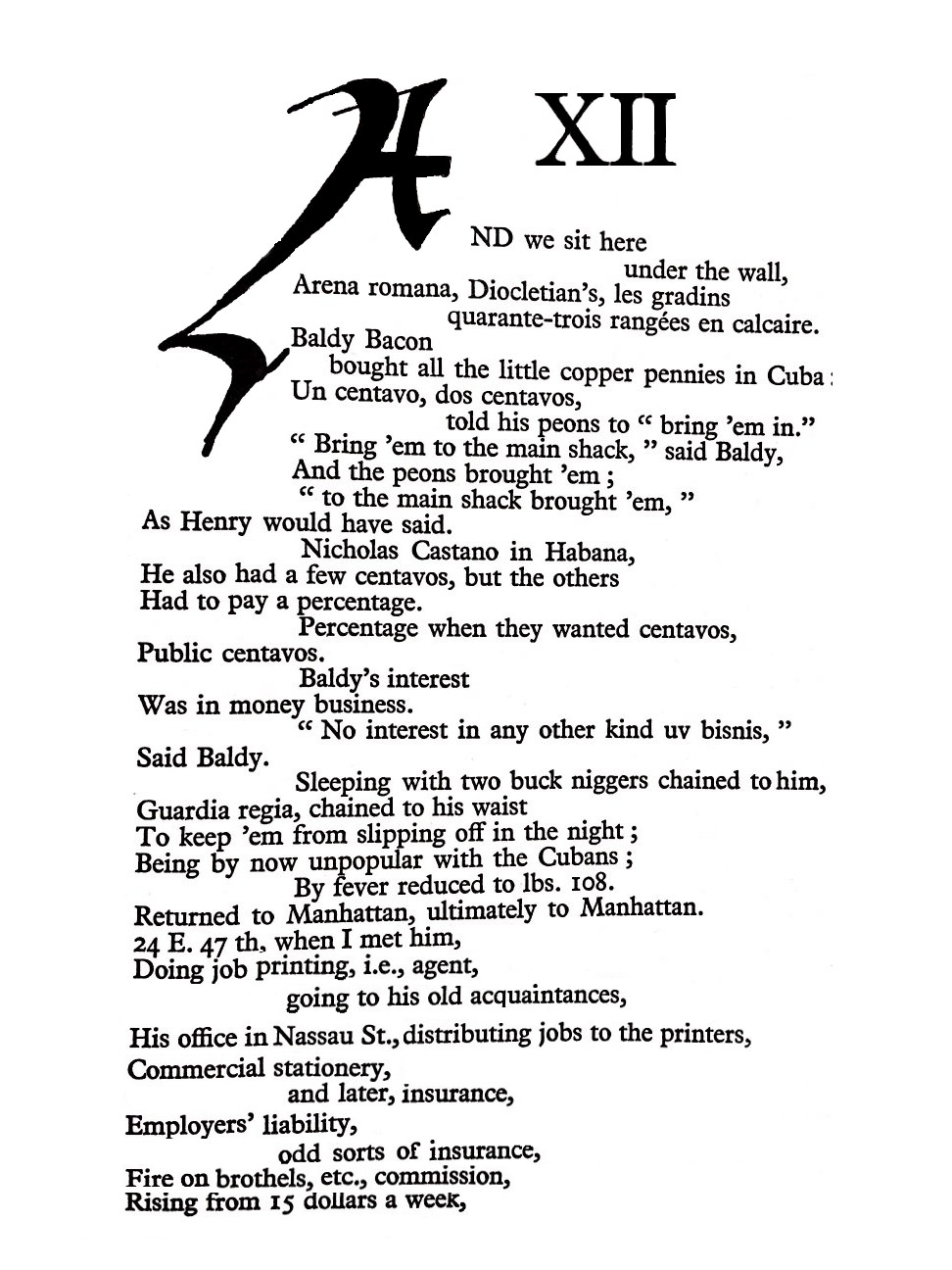 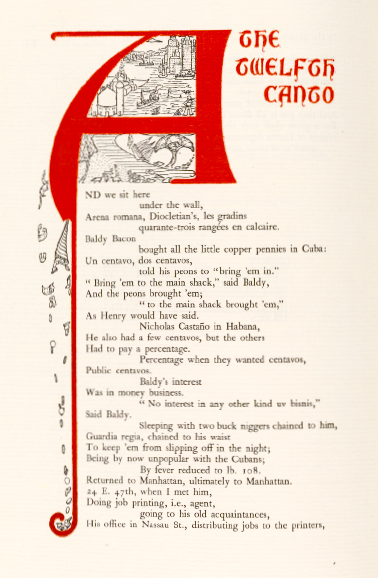 Canto XII was written in two phases: the first draft of spring of 1922 antedated the Malatesta Cantos and was put on the back burner until the Malatesta group was finished. Pound continued to work sporadically on the canto in July 1922, while the research for Malatesta was just beginning. He used his old memories of Baldy Bacon and Quade, whom he had met in 1910 in New York. He saw Baldy again in the summer of 1922, but reported to his father that the canto had nothing to do with the visit, since he had “typed it out” before seeing Baldy again. The tale of the Honest Sailor was told by John Quinn, whom Pound had met on the same occasion, in 1910. It is unlikely that Quinn told him the anecdote at that time, since the two men did not immediately become friends. Quinn visited Paris in 1921 and it is possible that he told Pound the story on that occasion.

Pound revised the draft of 1922 in the summer of 1923 and published part of it together with the Kung canto (no. XIII) in the first number of transatlantic review in January 1924. The poems lacked numbers and their order was reversed: The Kung Canto came first and was called “One canto”; The present canto (XII) was “Another canto.” The tale of the Honest Sailor was missing - from his letter to Jeanne Forster in 1925, we may conclude that Pound had serious concerns that the story might land him in trouble with the censor. Bearing in mind the problems that Joyce and The Little Review had had with the Nausicaa chapter of Ulysses in 1921, his worries may have been justified. At all events, he continued to protect Quinn’s name through all the published versions of this canto by using the pseudonym Jim X.

Have had busy spring [...] and have blocked in four cantos - (Including the “Honest Sailor”, which I hope I haven't spoiled). At work on the “Hell” canto, chiefly devoted to the English.

Still, having got Morand translations off my hands […] And having got five cantos blocked out, I am about ready for the vacation I did not take in Italy. Am feeling damn fit.

Perhaps as the poem goes on I shall be able to make various things clearer. Having the crust to attempt a poem in 100 or 120 cantos long after all mankind has been commanded never again to attempt a poem of any length, I have to stagger as I can.

The first 11 cantos are preparation of the palette. I have to get down all the colours or elements I want for the poem. Some perhaps too engmatically and abbreviatedly. I hope, heaven help me, to bring them into some sort of design and architecture later.

Note: “The first 11 cantos” would include the present canto 12 and 13, since at the time he wrote the letter, Pound was not envisaging writing four Malatesta cantos but just one.

Frank Bacon, (Cuban pennies Bacon) turned up yesterday at 11.30 to my great joy.

He may have to go to London tomorrow & I have given him yr. address.

He’s about my oldest friend save Bill.

Frank Bacon also turned up last week. Was damn glad to see him, after twelve years. Had just used part of his biography in my cantos (Canto X).

Note: At the time, Pound had written just one Malatesta Canto (number 9) and was considering expanding it to two cantos. So his draft canto 10 became 12. Pound had also drafted the Kung canto (no. 11 which became 13) and the two hell cantos (12, 13 which became 14 and 15).

Bacon is O.K. though it wd. be a little hard for you to get him into full swing. I think the mixture of what he thinks due to fair sex, and nationality.

Sorry you didn’t introduce him to T., [Eliot] though I suppose it may have seemed a bit complicated. T. might have drawn him out for you. (on the other hand might merely have been gené at presence of impediment to familial conversation.) thaats thaat.

Bacon, remember, is fairly well acquainted with Rabelais and “ole man James”, though it may n’t come out in the first half hour.

Have blocked in 4 cantos on Malatesta and am now verifying last details (Vatican Library this A.M.), also geographical verification, cross country in wake of S.M. to see how the land lay. [...]

Trust, or rather hope, you'll like my version of the Honest Sailor, which comes in canto XIII (to follow the Malatesta Cantos)...

Will send you a copy of July Criterion, as soon as I get it. It is to contain the Malatesta.

Other cantos lying here on desk unfinished. Including Hell and the Honest Sailor.

Cantos IX to XII are in July Criterion. Am revising the earlier one for S Oiseau’s edition.

Cantos are in Criterion for July. More being prepared for Three Mts, edition de luxe.

Baldy Bacon is F. S. Bacon. he visited us in Wyncote once or twice. also turned up in Paris last year 2 days after I had typed out that canto. There is a hell (2 cantos) & war (one canto.) & the honest sailor 1/2 of that canto - that you haven’t yet seen - reserved - for the book.

You may be faintly cheered to see John’s honest sailor in the capital of CANTO XII backside to the audience…. You can threaten the family that if they don’t behave I will print it J. Q. instead of lightly veiling the narrator. On the whole you’d better not, as they wd. get the hole book put on the HINDEX and stopped at customs. 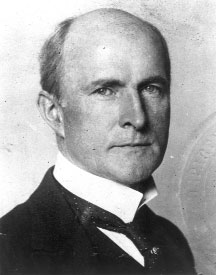