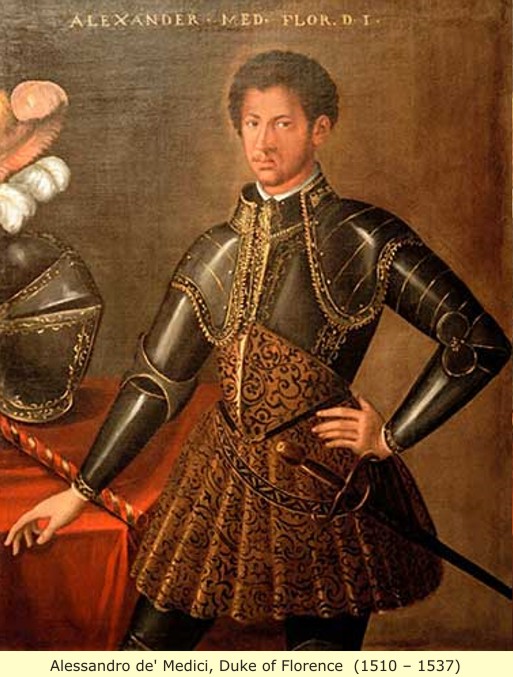 Once in a lifetime [...] a man may try-without rhetoric, without hankering after grandiose utterance-to straighten out his ideas on history, the rise of nations, the developments and atrophies of civilization, and all these and other things soiled by the clichés of politicians, Fourth of July orators, Orleanists, Claudelists, etc. (including social and religious instructors). [...]

The bulk of our civilisation is very probably due to the Roman Empire, but from the death of Septimus Severus (A.D. 211) to the abdication of Diocletian (A.D. 305) there were 19 emperors, and only one died comfortably in his bed, after a reign of two years.

Any historical concept and any sociologial deduction from history must assemble a great number of such violently contrasted facts, if it is to be valid. It must not be a simple paradox, or a simple opposition of two terms. [...]

Out of the welter I get perhaps only an increasing hatred of violence, an increasing contempt for destruction. I would not, in the present state of my sensibility, I would not destroy even the Albert Memorial. 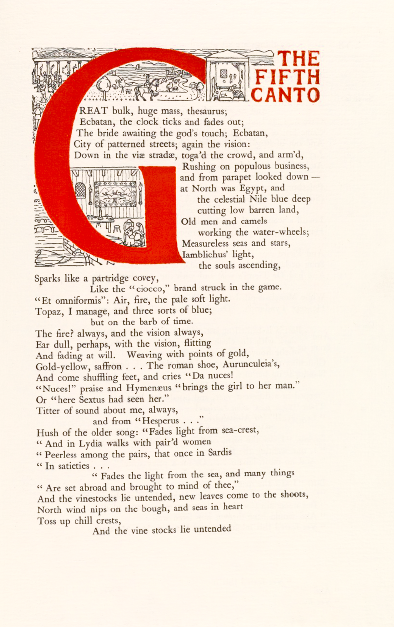 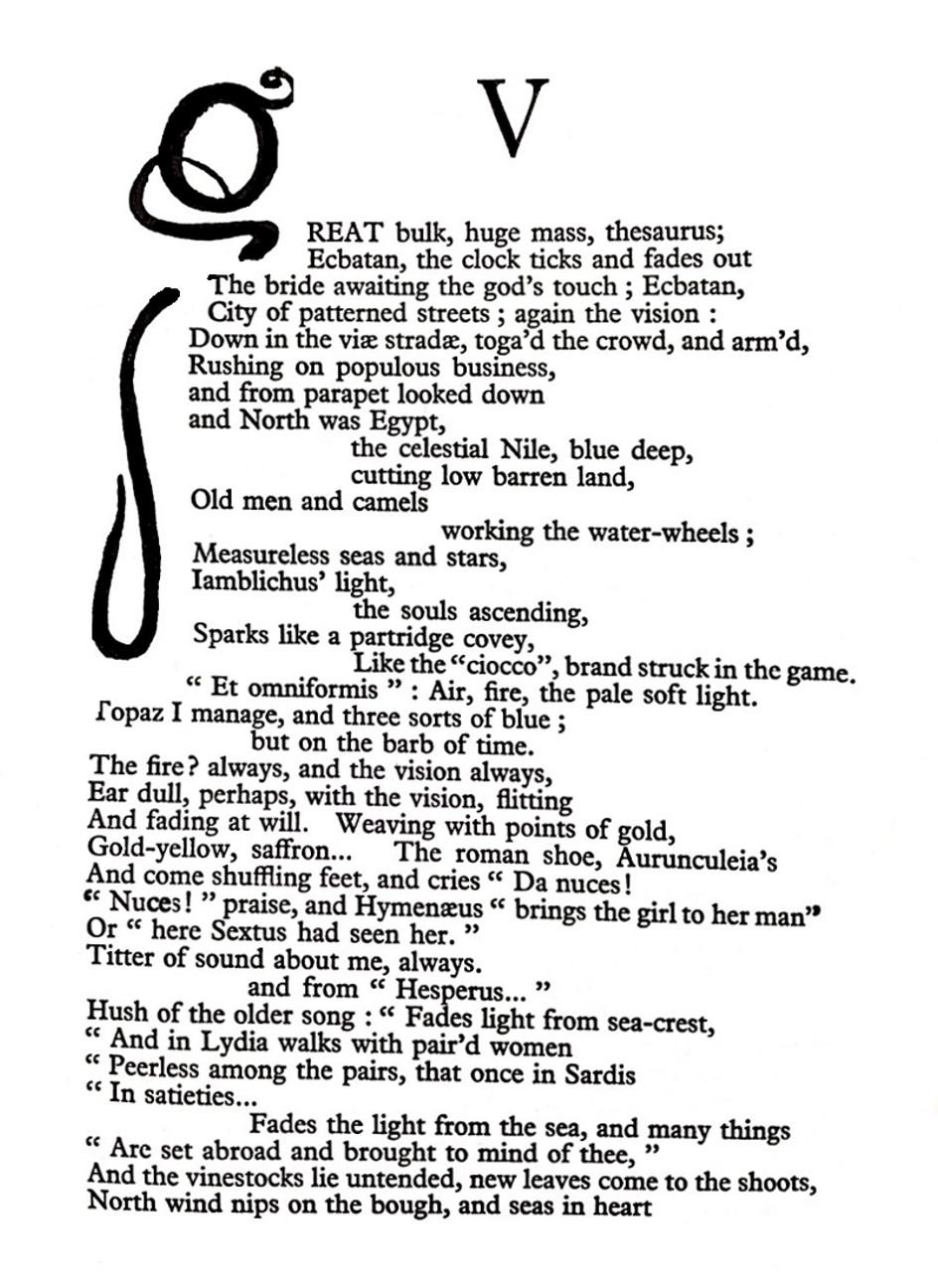 The Calendar shows that the canto was begun in April and finished before 6 October 1919. "Between theatres" suggests that Pound wrote most of it after returning from France in September 1919.

It is a great work and worth the trouble of hacking it out.

I began to get it on about the 6th reading – though individual passages come up all right on the first reading.

It is probably the greatest poem in English. Certainly the best long poem in English since Chaucer. You’ll have to read it sometime as my big long endless poem that I am now struggling with, starts off with a barrel full of allusions to “Sordello” – which will intrigue you if you haven’t read the other.

I must have the lot typed out & send it you as a much belated Xmas. – though I dare say the present version needs a lot done to it.

It will be two months at least before I can send it. - I suppose - as I dont want to muddle my mind now in the Vth canto - by typing the first three cantos - and I dont want to leave the only copy with a typist while I’m out of town.

Canto V already in a first draft before Pound goes to Stone Cottage on Tuesday, 21 December 1915.

Here is a draft <with a few annotations for you> of Fourth canto; not to be shown to anyone (save I.W.P. if she wishes to see it) Wont be printed until there is another bundle of three; Fifth is begun.

Have some hope of getting South. At least we have our passports, and a job lot of French bank notes.

Dating from collateral information in the letter. Pound had finished preparations for his trip to the South of France and would reach Toulouse by 23 April. IWP is Isabel Weston Pound, the poet’s mother.

I have done Canto V... somthime [sic] between theatres... even tryscript [sic] of it not “dry” yet.

As Liveright never answers a letter. Please phone that I have three new cantos done. THUS there is enough matter for American edition of poems, as follows.

Liveright’s agent wrote asking if they could import Q.P.A., you understand that the first three cantos are in Knopf’s Lustra, therefore the English sheets of Q.P.A. can not be sold in America.

[...] Have done cantos 5, 6, and 7, each more incomprehensible than the one preceding it; dont know what’s to be done about it. Liveright says he is ready to bring out vol. of poems. Shall put Propertius first and follow by ‘Langue d’oc and Cantos IV to VII, book about the same size as Q.P.A.

Queery, would you have printed Fenollosa’s essay on The Chinese Written Character? Do you want serious contributions to thought... or merely second hand jaw? Mr. Quinn implies you want my verse rather than my prose. I [am] send[ing] [sep. cover] four cantos. Canto IV is o.k. by itself, Cantos V.VI.VII shd. appear together as the Lorenzacchio [sic] Medici begins in V. and ends the VII.

I shouldn’t insist on their being printed all together, but it wd. be better. It wd. also affirm my connection with the magazine, as I shd. not print this long poem in any paper which I was not backing. There are not likely to be more than two cantos each year, the rest of my stuff wd. be shorter poems (or prose if wanted).

Am sending you ‘Mauberley’, my new poems, advance sheets. I dont want you to show it to people YET.

I want the Dial to print cantos IV-VII, they probably want something of mine, and wd. certainly prefer short poems to the cantos. Therefore I want them to remain in igornace [sic] of the fact that there are any short poems, until the cantos have had a full chance.

If they saw the short poems first, they wd. probably want to print them instead of cantos. It wd. get my name into the Magazine, for less money, and in more convenient way. Therefore please lie low about ‘Mauberly’ until you hear from me.

Thank you for the verses. Canto IV is now in the press and will appear in our June issue. Cantos V, VI, and VII we are returning to you.

It seems wise that I should speak to you rather frankly of our present difficulties in publishing THE DIAL. Of course it is most important to keep up an appearance of prosperity before the world and therefore what I am about to say is said in all confidence. Although you are in a position to have some conception of conditions over here, I really believe the public's attitude toward our too harmless journal would astonish you. It certainly has astonished Watson and myself. We are attacked most violently on every occasion, in the press and by mail and in personal conversation, for publishing verse that does not rhyme and pictures that are not lifelike. For some reason that is quite impossible of analysis, to publish a reproduction of a painting by Cezanne is discovered to be an attack, the more terrible because in[sid]ious, upon the very heart of patriotism, Christianity, and morality in general. THE DIAL has been characterized in a letter written by a  gentleman of some position in artistic circles hereabouts as a dastardly attack upon “all that the good and wise of every generation have lived and died for.” You get the authentic note, hey? I myself was recently characterized at a dinner dance as a degenerate. We should never have thought of undertaking this job had we anticipated one-tenth of the difficulties we have encountered. Newsstands even refuse to carry THE DIAL and only day before yesterday the American News Company, after months of deliberation, decided that they could not undertake to circulate our paper. We have, however, gone so far in this matter that we have decided to stick it out at any rate a few months more before throwing up the sponge. Disagreeable as it is to mention this fact in order to give you some idea of what we are up against, I feel it necessary to state that Mr Watson and myself have, since we took over control of the paper the later part of [31] November, expended upon it about sixty thousand dollars. It is going to cost us another forty to finish up the current year.

You are inducted into all these troubles to explain why three cantos of your very distinguished poem were recently returned to you. We sent them back merely because after infinite hesitations and regrets we decided that we could not accept, conditions being such as they are, so much verse of an unconventional quality. I don’t blame you a bit if you were very put out and even if you are now. I really think, however, had you been here and a member of the editorial board, you would have been the first to wish to withdraw the manuscript in question, at least for the time being. The hostility to us has however within the last week become so acute that it has become a question either of excluding all the things about which we care most, or of immediately stopping publication, or of printing anything unconventional–either verse, prose, or pictures–in a department of the magazine devoted entirely to what we shall call “Modern Forms.” This department will occupy the middle of the magazine; in other words, the most dignified position. I hope you will not feel that this is too undignified. It is the last concession we shall make to the public. Now that we have this department we are very sorry indeed that we have returned your three cantos. Will you let us have them back? If so, do write and tell me what you think of our arrangement. This department entitled “Modern Forms” will first appear in the July issue, the June issue being already printed.

With many apologies for your country and mine.

I will send you back the cantos [5-7] from Paris, if you think they won't wreck the paper.

C. re Liveright. I have sent the rest of copy for

It contains the Imperium Romanum (Propertius)

It is all I have done since 1916, and my most important book, I at any rate think Canto VII the best thing I have done;

If America won’t have it, then Tant Pisssss as the French say. I have my answer, and it means twenty more years of Europe, perhaps permanent stay here.

[…] At any rate the three portraits, falling into a Trois Contes scheme, plus the Cantos, which come out of the middle of me and are not a mask, are what I have to say, and the first formed book of poem[s] I have made. Lustra being, I admit, simpler and more understandable.

[…] By the time you get this Cantos shd. have appeared in Dial. (cantos V-VII)

[…] Perhaps as the poem goes on I shall be able to make various things clearer. Having the crust to attempt a poem in 100 or 120 cantos long after all mankind has been commanded never again to attempt a poem of any length, I have to stagger as I can.

The first 11 cantos are preparation of the palette. I have to get down all the colours or elements I want for the poem. Some perhaps too engmatically and abbreviatedly. I hope, heaven help me, to bring them into some sort of design and architecture later.

Went to print show while Bill corrected a sheet of Canto V. and saw various other bits of later cantos. It looks like a very fine bit of printing. 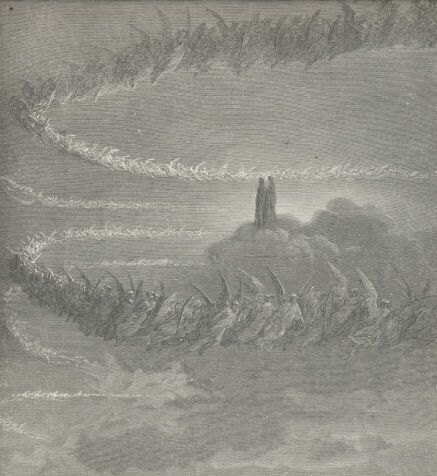