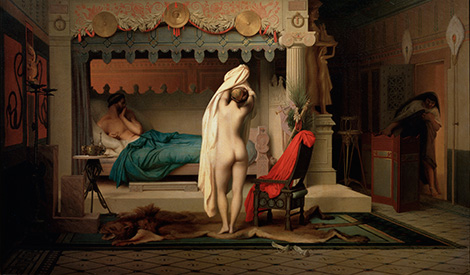 [I.7.4] The Heraclidae, descendants of Heracles and a female slave of Iardanus, received the sovereignty from these and held it, because of an oracle; and they ruled for twenty-two generations, or five hundred and five years, son succeeding father, down to Candaules son of Myrsus.

[I.8.1] This Candaules, then, fell in love with his own wife, so much so that he believed her to be by far the most beautiful woman in the world; and believing this, he praised her beauty beyond measure to Gyges son of Dascylus, who was his favorite among his bodyguard; for it was to Gyges that he entrusted all his most important secrets.

[I.8.2] After a little while, Candaules, doomed to misfortune, spoke to Gyges thus: “Gyges, I do not think that you believe what I say about the beauty of my wife; men trust their ears less than their eyes: so you must see her naked.” Gyges protested loudly at this.

[I.8.3] “Master,” he said, “what an unsound suggestion, that I should see my mistress naked! When a woman's clothes come off, she dispenses with her modesty, too.

[I.8.4] Men have long ago made wise rules from which one ought to learn; one of these is that one should mind one's own business. As for me, I believe that your queen is the most beautiful of all women, and I ask you not to ask of me what is lawless.”

[I.9.1] Speaking thus, Gyges resisted: for he was afraid that some evil would come of it for him. But this was Candaules' answer: “Courage, Gyges! Do not be afraid of me, that I say this to test you, or of my wife, that you will have any harm from her. I will arrange it so that she shall never know that you have seen her.

[I.9.2] I will bring you into the chamber where she and I lie and conceal you behind the open door; and after I have entered, my wife too will come to bed. There is a chair standing near the entrance of the room: on this she will lay each article of her clothing as she takes it off, and you will be able to look upon her at your leisure.

[I.9.3] Then, when she moves from the chair to the bed, turning her back on you, be careful she does not see you going out through the doorway.”

[I.9.4] As Gyges could not escape, he consented. Candaules, when he judged it to be time for bed, brought Gyges into the chamber; his wife followed presently, and when she had come in and was laying aside her garments, Gyges saw her;

[I.10.1] when she turned her back upon him to go to bed, he slipped from the room. The woman glimpsed him as he went out, and perceived what her husband had done. But though shamed, she did not cry out or let it be seen that she had perceived anything, for she meant to punish Candaules;

[I.10.2] when she turned her back upon him to go to bed, he slipped from the room. The woman glimpsed him as he went out, and perceived what her husband had done. But though shamed, she did not cry out or let it be seen that she had perceived anything, for she meant to punish Candaules;

[I.10.3] since among the Lydians and most of the foreign peoples it is felt as a great shame that even a man be seen naked.

[I.11.1] For the present she made no sign and kept quiet. But as soon as it was day, she prepared those of her household whom she saw were most faithful to her, and called Gyges. He, supposing that she knew nothing of what had been done, answered the summons; for he was used to attending the queen whenever she summoned him. Candaules and Gyges

[I.11.2] When Gyges came, the lady addressed him thus: “Now, Gyges, you have two ways before you; decide which you will follow. You must either kill Candaules and take me and the throne of Lydia for your own, or be killed yourself now without more ado; that will prevent you from obeying all Candaules' commands in the future and seeing what you should not see.

[I.11.3] One of you must die: either he, the contriver of this plot, or you, who have outraged all custom by looking on me uncovered.” Gyges stood awhile astonished at this; presently, he begged her not to compel him to such a choice.
[I.11.4] But when he could not deter her, and saw that dire necessity was truly upon him either to kill his master or himself be killed by others, he chose his own life. Then he asked: “Since you force me against my will to kill my master, I would like to know how we are to lay our hands on him.”
[I.11.5] She replied, “You shall come at him from the same place where he made you view me naked: attack him in his sleep.”
[I.12.1] When they had prepared this plot, and night had fallen, Gyges followed the woman into the chamber (for Gyges was not released, nor was there any means of deliverance, but either he or Candaules must die). She gave him a dagger and hid him behind the same door;
[I.12.2] and presently he stole out and killed Candaules as he slept. Thus he made himself master of the king's wife and sovereignty. He is mentioned in the iambic verses of Archilochus of Parus who lived about the same time.
[I.13.1] So he took possession of the sovereign power and was confirmed in it by the Delphic oracle. For when the Lydians took exception to what was done to Candaules, and took up arms, the faction of Gyges came to an agreement with the rest of the people that if the oracle should ordain him king of the Lydians, then he would reign; but if not, then he would return the kingship to the Heraclidae.
[I.13.2] The oracle did so ordain, and Gyges thus became king. However, the Pythian priestess declared that the Heraclidae would have vengeance on Gyges' posterity in the fifth generation; an utterance to which the Lydians and their kings paid no regard until it was fulfilled.
[I.14.1] Thus the Mermnadae robbed the Heraclidae of the sovereignty and took it for themselves. Having gotten it, Gyges sent many offerings to Delphi: there are very many silver offerings of his there; and besides the silver, he dedicated a hoard of gold, among which six golden bowls are the offerings especially worthy of mention.
Source
Herodotus. Histories. with an English translation by A. D. Godley. Cambridge. Harvard University Press. 1920. Book I: 7.4-14.1. perseus.tufts.edu.