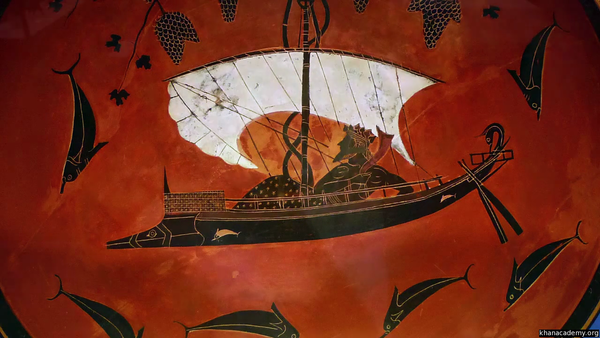 It is not surprising that art in the 20th century should have rediscovered metamorphosis, nor that the metamorphoses in the second Canto should include Aeschylus’ grim transformation of the name of Helen, as well as the eyes of Picasso, metamorphoser of vision, peering from beneath a seal’s fur hood that conceals a ‘lithe daughter of Ocean.’ And it was from under sealskins furnished by such a daughter that Menelaos and his men leaped forth on the beach to bind Proteus. Everything in the Canto is trickily unstable; what is named is not quite what is there. […]

And the style is Imagist. The brevity of Imagist notation seized phenomena just on the point of mutating, as in the most famous example an apparition of faces turns into petals. Misrepresented as a poetic of stasis, it had been a poetic of darting change; for a whole page, in the Canto, perception succeeds perception like frames of film.

Pound wrote this Canto about the time his countrymen were passing the 18th Amendment, outlawing the wine-god. Never having heard of Pentheus, they were courting his fate. Scott Fitzgerald has told the rest.

The canto, which at first sight can appear a simple succession of fragments, can now be seen to be organized as a musical composition. It has a main theme, and a counter-theme, both of them developed through a series of variations around the extended central episode. Simply stated, the theme has to do with the different modalities of seeing the sea of being and all that is in it; while the counter-theme has to do with the errors of false or one-eyed perception which can arise from and lead to possessiveness, repression, rape. In the development through the variations of the main theme there is a progression from myth, which opens the mind to what there might be in life, towards precise observation and analysis of its manifestations. The light and life-in-process of the universe, it is implied, are not occult but are evident to illuminated sense, as in the 'Salmon-pink wings of the fish-hawk'.

CANTO XLVII [revelation of the divine in nature]

CANTO XLIX [the power of vision and the pastoral of the East; the opposite of metamorphosis: stillness]