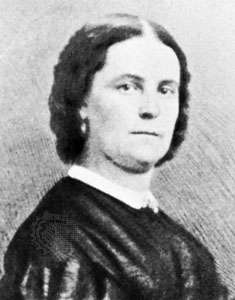 A woman dead these fifty years, who was the centre 100 years ago of a fierce struggle in Washington, involving about everybody in the government from the President down, now offers her own plea for justice. Peggy Eaton, daughter of a tavern keeper, wife of the secretary of war, against whom the society doors were closed, admits her faults, her “freaks of temper,” her “blunt and sharp Saxon” manner of speaking, her “passion for fun,” her vanity. But one feels the fierce heat of her vehement repudiation of the more serious charges against her even now, and she wrote her story in 1873.

President Jackson exerted all his powers in her behalf. He told his cabinet their political fortunes depended largely on their attitude towards Mrs. Eaton. But the wives of the cabinet defied their husbands and Old Hickory himself and won. Mrs. Eaton resented until her dying day the aspersions upon her character. When, at the age of 70, she read an article reviving the old scandal, she consulted a leading clergyman of the time, Dr. Charles F. Deems of the Church of the Strangers in New York city. On his advice she prepared her “defence before posterity.” He suggested she “let it rest a while” and she agreed under the pledge that at a suitable time publication should be made. Dr. Deems died in 1892 and the widow of his son haw now fulfilled the obligation.

All the trouble in the judgment of Mrs. Eaton was due to “the Calhounites.” The great South Carolinian was Vice-President in the early part of Jackson’s first term, as he had been in the term of Jackson’s predecessor, John Quincy Adams, and expected to follow Jackson in the presidency. In the cabinet were two or three men whom Calhoun could not control, especially Eaton. The Calhoun men, therefore, must break down Peggy’s husband and the way to do it was to attack Peggy’s character. Says Mrs. Eaton: “I was the victim of these political machinations.” The results were the disruption of the cabinet and the blocking of the political ambitions of Calhoun. Jackson saw to it that Martin van Buren and not Calhoun should be his successor.

Historians have agreed with Mrs. Eaton in holding that one reason for Jackson’s championship of her cause was that he himself had suffered intolerably because of the stories that had been circulated about his own wife, his beloved Rachel. Mrs. Eaton says: “This great old hater was a grand old lover and believed in my virtue as he believed in the virtue of his own wife.”

Undoubtedly there were other causes not noted by Mrs. Eaton for the break between Jackson and Calhoun. Her interest is in her own vindication. Jackson was enormously influenced by the revelation that Calhoun wanted him to be court-martialed for his conduct in the Seminole war. In the end, Jackson excluded the Calhoun partisans from his cabinet and Calhoun resigned the vice-presidency to enter the Senate where again there appeared one of the fundamental differences between himself and Jackson, the one the ardent champion of state sovereignty, the other of the federal union.

It is hard to believe that Mrs. Eaton did not write the truth in this apologia. She charges Parton in his Life of Jackson with egregious errors. She says: “My life shows that a virtuous girl, the daughter of virtuous parents, cannot escape calumny at the hands of biographers. No low man ever dared from my earliest girlhood to intrude himself upon me.” And again: “I never was a placid person. My virtues are not of the serene kind. I boiled.” Also: “No one accused John H. Eaton of being bad. It was only his wife: and she was charged with being bad only with him. … If I was such a woman at that time how was it that no one has ever ventured to say since Jackson’s cabinet was dissolved that my behavior with any man has been ‘indiscreet’? When the political ends were gained, they did not even take interest any longer in slandering me.”