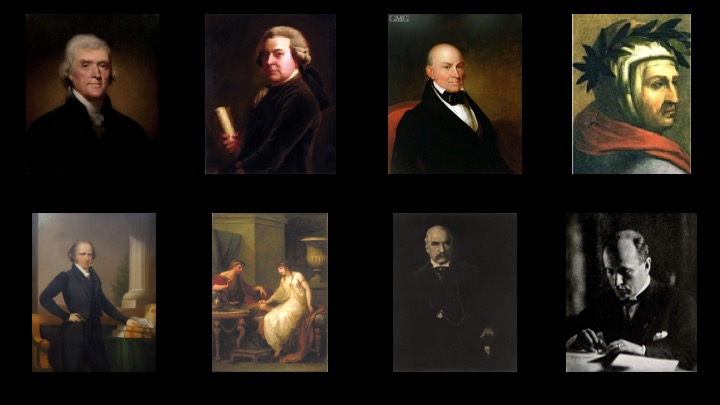 The heritage of Jefferson, Quincy Adams, old John Adams, Jackson, van Buren is HERE, NOW in the Italian peninsula at the beginning of fascist second decennio, not in Massachusetts or Delaware.

To understand this we must have at least a rudimentary knowledge of the first fifty years of United States history AND some first hand knowledge of Italy 1922-33 or 1915-33, or still better some knowledge of 160 years of American democracy and of Italy for as long as you like.

2. The period of thinning, of mental impoverishment, scission between life of the mind and life of the nation, say 1830-1860.

3. The period of despair, civil war as hiatus, 1870 to 1930. The division between the temper, thickness, richness of the mental life of Henry Adams, and Henry James, and that of say U. S. Grant, McKinley, Harding, Coolidge, and Hoover.

4. The possibilities of revival, starting perhaps with a valorisation of our cultural heritage.

Pound’s principle of historical explanation is neither Spenglerian nor Marxist; it is Douglasite. On Douglasite grounds the process of history can only be understood when the place and function of money and credit in society is understood. However, Douglas’s economic theories were not devised to explain the past; his interest was in the present and the immediate future. The notion that great historical events can be explained by the touchstone of sound monetary principles is excessively simplistic. Commitment to such a view obliges one to account for wars and economics or political collapse by ascribing incredible stupidity or boundless malice to the leaders of nations. Pound does not shrink from this necessity.

Note on the colour used in the table above: violet: companion to the canto.