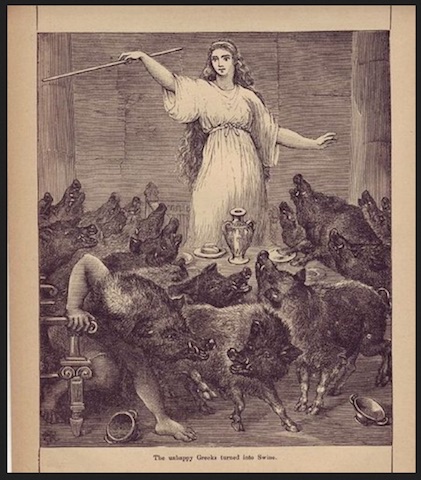 I admit there are a couple of Greek quotes, one along in 39 that can’t be understood without Greek, but if I can drive the reader to learning at least that much Greek, she or he will indubitably be filled with a durable gratitude. And if not, what harm? I can’t conceal the fact that the Greek language existed.

CANTO I [Odysseus and Circe’s advice; theophany of Aphrodite]

CANTO XLVII [Circe and Odysseus; the divine mystery of sex] 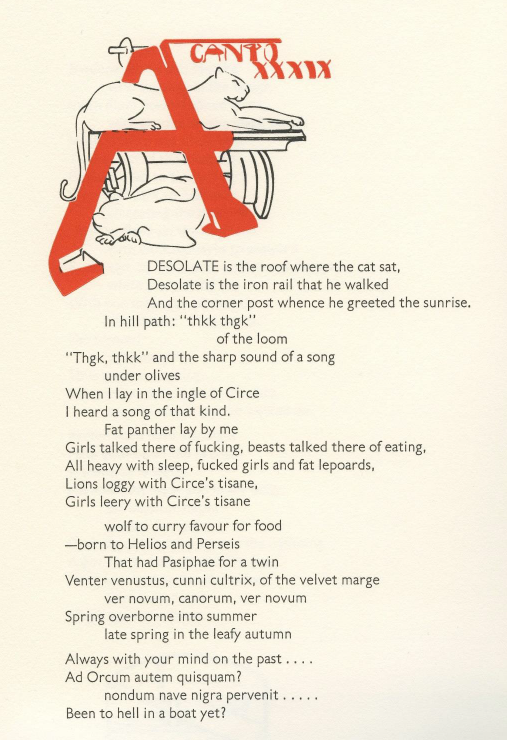 The drafts of canto XXXIX indicate there are two distinct phases of composition: the first, October 1931, outlines a text centred on Hathor, a masculine deity or hero, and Patha who fought the tiger and took out his eye. Pound seems to have left the text to rest for a while and took it up again in March 1933, when he dropped the initial story and re-focused it on Circe and Odyssseus. Pound’s letters to Olga Rudge indicate that the canto was ready by 3 April 1933.

Just back and very tired, and as I didn’t tidy up desk BEFORE I left; there is more helluva confusion etc.etc.

Most of the cream was at the zoo.

The rest mostly Terracina of which there are no photos.

He sent her view of Terracina yesterday […] to seeingvat T. looks like he thinks she’ll git it a wk. after this.

Hiz my job. to finish Two normous vols of V. Berard on Pheniciens & Odysee before his money runz out & he has to return to Rap.

He trying to write a poetic canto. not to say lussurioso.

it is time as allus, to EAT/ and he has got to page 4 of a canto, and possibly the rest only needing copyin’

he continuin his pome

She’z got the finished copy of Canto 39/ but guess I have carbon and only need to fill in greek/ she not bother to return it until he ascertains.

She GOT any bright ideas fer his next cantos?

YES// O/K/ he has got a good carbon of XXXIX, so she can keep the one she has with her.

Incidentally I dunno who is going to do the Folio of Cantos XXVIII to XLV (or thereabouts); There are 28 to 39 now ready, the second folio vol. ends with 27.

Wot about 61 more Cantos waitin to be did??

Cantos XXVIII to 39 ready. haven’t been in folio. I mean folio goes to 27/

Skip anything you don’t understand and go on till you pick it up again. All tosh about foreign languages making it difficult. The quotes are all either explained at once by repeat or they are definitely of the things indicated. If reader don’t know what an elephant is, then the word is obscure.

I admit there are a couple of Greek quotes, one along in 39 that can’t be understood without the Greek, but if I can drive the reader to learning at least that much Greek, she or he will indubitably be filled with a a durable gratitude. And if not, what harm? I can’t conceal the fact that the Greek language existed.

Yr/ eminently correct point of view occurred to one other high authority, and is incorporated at the start of I think it is 39.

Note: As the editor of the Pound-Laughlin correspondence, David Gordon, states, Laughlin’s “correct point of view” was included in his letter of 18 January 1934, in which he commented on Richard Blackmur’s “depressing” essay on the Cantos published in Hound and Horn: [Blackmur] “is unwilling to see that the CANTOS are the one non-defeatist poem of the age that shows what life is like and where it has been and what about it” (L/JL 19).

Now look here, Podesta, to begin with I am just recoverin from a acute coryza & my secretary [is ill] and I aint got time to deal with much until next Week but […] the immediate point is this that me and also Faber who ought to know some more Greek than I do bein a 1st in Greats have been tryin to emend your greek qootations Podesta why dont you ever read your proofs and verify your references and Podesta why dont you adopt some SYSTEM of transliteration if you got to transliterate at all But he as well as I is handichapped by not knowing the sources and perhaps less familiarity I might say indeed on your part Gross familiarity Podesta with the Yomeric Ymns dont know where ALL the dambed things come from, can you give exact refs. those two big quotes especial they are certainly Meaty when it comes to errors of one Kind or another Do you want the proof back or what damb your eyes liver lights etc. so will close.

I don’t quote in full, I leave out woidz that don’t comport with wot I’ma driving at.

Fht margint – right margin. The numbers of the Homeric text are there (ll.490-5) but indicate six lines where only five were printed.

Book K. – Book X of the Odyssey. Pound’s edition numbered the chapters using the Greek alphabet: K corresponds to 10. See it in Sources.

Waal naow, Possum my Wunkas, Dew yew XXXpekk me to be pracTical AWL th time? Aint it enuff thet I write a nice practical XI Cantos to inskrukk the reader in hist/ and econ/ even if I do leave out a greek hack/cent, which most of the readers wd/ learn to copulate WITHOUT, almost as soon/ unless impeded...

(And) I’m not going to tell the U.S.A (even) if my word doesn’t spread further than the leetle maggiezeens, that in Mr. Pound’s last “Cantos” I have found nothing to move the cockles of my heart or the network of my brain, outside of 5 lines (perfect lines) given over to Hathor & her box and some musical metaphysics of the dark Cavalcanti. 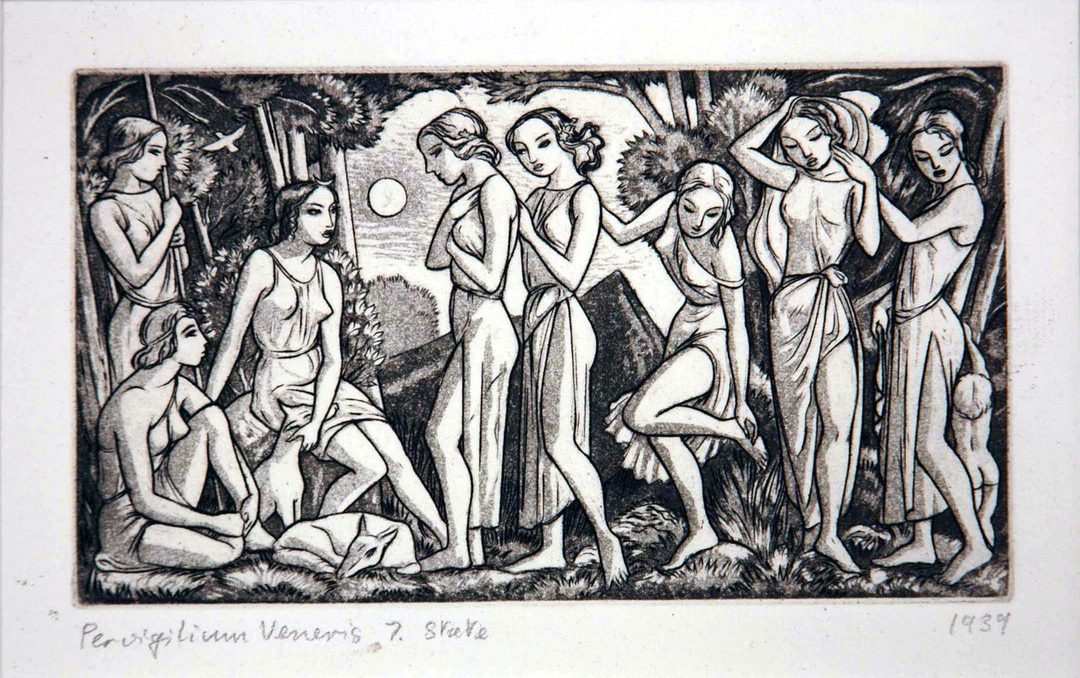