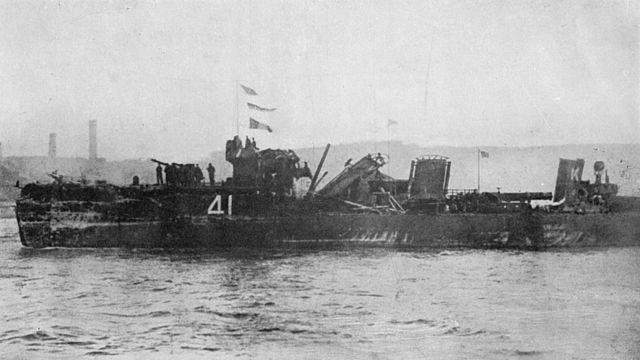 AS I said, we will confine ourselves to something quite sane and simple which does not involve more than half-a-dozen different reports.

When the German fleet ran for home, on the night of May 31, it seems to have scattered—“starred,” I believe, is the word for the evolution—in a general sauve qui peut, while the Devil, livelily represented by our destroyers, took the hindmost. Our flotillas were strung out far and wide on this job. One man compared it to hounds hunting half a hundred separate foxes.

I take the adventures of several couples of destroyers who, on the night of May 31, were nosing along somewhere towards the Schleswig-Holstein coast, ready to chop any Hun-stuff coming back to earth by that particular road. The leader of one line was Gehenna, and the next two ships astern of her were Eblis and Shaitan, in the order given. There were others, of course, but with the exception of one Goblin they don’t come violently into this tale. There had been a good deal of promiscuous firing that evening, and actions were going on all, round. Towards midnight our destroyers were overtaken by several three- and four funnel German ships (cruisers they thought) hurrying home. At this stage of the game anybody might have been anybody—pursuer or pursued. The Germans took no chances, but switched on their searchlights and opened fire on Gehenna. Her acting sub-lieutenant reports: “A salvo hit us forward. I opened fire with the after-guns. A shell then struck us in a steam-pipe, and I could see nothing but steam. But both starboard torpedo-tubes were fired.”

Eblis, Gehenna’s next astern, at once fire a torpedo at the second ship in the German line, a four-funnelled cruiser, and hit her between the second funnel and the mainmast, when “she appeared to catch fire fore and aft simultaneously, heeled right over to starboard, and undoubtedly sank.” Eblis loosed off a second torpedo and turned aside to reload, firing at the same time to distract the enemy’s attention from Gehenna, who was now ablaze fore and aft. Gehenna’s acting sub-lieutenant (the only executive officer who survived) says that by the time the steam from the broken pipe cleared he found Gehenna stopped, nearly everybody amidships killed or wounded, the cartridge-boxes round the guns exploding one after the other as the fires took hold, and the enemy not to be seen. Three minutes or less did all that damage. Eblis had nearly finished reloading when a shot struck the davit that was swinging her last torpedo into the tube and wounded all hands concerned. Thereupon she dropped torpedo work, fired at an enemy searchlight which winked and went out, and was closing in to help Gehenna when the found herself under the noses of a couple of enemy cruisers. “The nearer one,” he says, “altered course to ram me apparently.” The Senior Service writes in curiously lawyer-like fashion, but there is no denying that they act quite directly. “I therefore put my helm hard aport and the two ships met and rammed each other, port bow to port bow.” There could have been no time to think and, for Eblis’s commander on the bridge, none to gather information But he had observant subordinates, and he writes and would humbly suggest that the words be made the ship’s motto for evermore—he writes, “Those aft noted” that the enemy cruiser had certain marks on her funnel and certain arrangements of derricks on each side which, quite apart from the evidence she left behind her, betrayed her class. Eblis and she met. Says Eblis “I consider I must have considerably damaged this cruiser, as 20 feet of her side plating was left in my foc’sle.” Twenty feet of ragged rivet-slinging steel, razoring and reaping about in the dark on a foc’sle that had collapsed like a concertina! It was very fair plating too. There were side-scuttle holes in it what we passengers would call portholes. But it might have been better, for Eblis reports sorrowfully, “by the thickness of the coats of paint (duly given in 32nds of the inch) she would not appear to have been a very new ship.”

I hope you will allow me the familiarity, and will return it.

Let me say at once, Pound’s daughter was right [Mary de Rachewiltz’ reference to Kipling in Discretions 158], though the ‘quote’ is not an exact one, rather a reference.

I have found a quote from Kipling which, I am pretty sure, is what Pound had in mind when he wrote that phrase. It comes in one of Kipling’s pieces of Journalism, written during World War 1. Specifically, it comes from a piece which he was asked to write by the Admiralty, after the battle of Jutland in 1916.

Forgive me if I set the scene a bit, with facts which you may know.

At the start of WW 1, the Great British Public expected that, fairly early on in the war, there would be a clash between the British and German battle-fleets in the North Sea, a sort of second Trafalgar. Such a battle didn’t occur, or not until May 1916, when, in misty weather, at the end of a long summer’s day, the two fleets met. The result was indeterminate; although the British suffered severe casualties, the German fleet fled: and whereas the British fleet, after returning to its bases to re-arm and refuel, was ready for sea again within three days, the German fleet was not ready for a matter of months. An American journalist described the battle in these words “The German fleet has assaulted its jailer, but remains in jail” – which was a pretty fair assessment.

As I said, the battle occurred at the end of a long summer’s day, and the fleets lost contact at dusk: the British admiral, Jellicoe, tried to position his fleet between where he thought the German fleet was, and its bases, so that he could catch them on the following morning, but in the dark, and in the days before radar, the bulk of the German fleet managed to elude him and made it back to their bases.

But, after the main battle fleets had lost contact, in the dark, the Germans slipped behind the British, and there were a number of confused actions in the dark, between British light forces, cruisers and destroyers, and the Germans.

The Admiralty, wanting to counter the German propaganda success, commissioned Kipling to write a series of articles about Jutland. He chose to write about the confused night actions between British destroyers, and the Germans, rather than the somewhat boring engagements between the battleship squadrons, because they were a great deal more personal, and involved more of the younger men, and not the Captains and Admirals. In fact, Kipling had been visited by more than one young officer who had been actively involved, before he was commissioned by the Admiralty. He wrote to a French correspondent, André Chevrillon (you’ll find the letter in Volume 4 of Professor Tom Pinney’s The Letters of Rudyard Kipling, at p. 380) “I had a boy down to lunch with me the other day , about four days after the little affair at Horns Reef. He was a captain of a destroyer and not until we had half-finished our meal, did he tell us, incidentally, that he had been through the business and had towed a disabled destroyer home” Kipling also wrote, “Williamshaven is full of unusable ironmongery and there is stuff at the bottom of the North Sea which will have to be fished up one of these days.” It was personal accounts like these which persuaded him to write about the small ships’ actions.

The result was a series of articles under the general title of Destroyers at Jutland. (We’re coming to the point now.) Part II, ‘The Night Hunt’, subtitled ‘Ramming an Enemy Cruiser’ contains the following: “Says Eblis “I consider I must have considerably damaged this cruiser, as 20 feet of her side plating was left in my foc’sle.” Twenty feet of ragged rivet-slinging steel, razoring and reaping about in the dark on a foc’sle that had collapsed like a concertina! It was very fair plating too. There were side-scuttle holes in it what we passengers would call portholes. But it might have been better, for Eblis reports sorrowfully, “by the thickness of the coats of paint (duly given in 32nds of the inch) she would not appear to have been a very new ship.”

I reckon that is what Pound had in mind when he wrote the phrase you’ve been trying to place, and I consider that his daughter had it right when she ascribed the origin to Kipling. The article appeared in the Daily Telegraph sometime between October 19 and October 31, 1916 and was later collected in Sea Warfare (Macmillan, 1916). Kipling, instead of using ships’ actual names, used devilish ones, e.g., Eblis and Gehenna. Eblis was, in fact, HMS Spitfire commanded by Lieutenant-Commander Clarence Trelawney, and the German cruiser was, in fact, one of their older battleships, SMS Nassau.

If you should want to follow the whole account up further, you should go to our Society’s web-site: www.kiplingsociety.co.uk; from that home page click on the button marked ‘Readers’ Guide: the resulting page has a red side bar; click on ‘The Main Works’ and then, from the resulting list, click on ‘Sea Warfare’. thence you click on ‘Destroyers at Jutland’. In the top RH corner of the resulting page. you will find a little red arrowhead, labelled ‘Kipling’s Article’, click on that and you will come to a blue list of headings and in the middle of that, in black, is ‘The Night Hunt’ - and - at last - you will find the text you’re looking for. The sentence about the paint is the very last one of that section of the article. Phew! Got there at last.

We are very lucky that the texts of virtually all Kipling’s published work, verse and prose, can be found on line, in a form that can be searched. I merely used the word ‘paint’, and having tried all the tales I could think of which had a sea-going flavour, I thought of his journalism, and looking at Pound’s reference to ‘ramming’ and ‘cruiser’ thought of the Jutland pieces, and lo and behold, there it was. I may say, I feel rather pleased with myself (Sorry!)