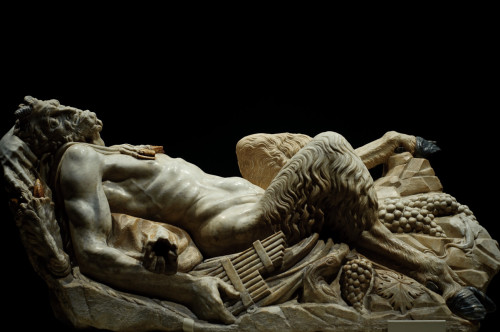 ON THE GOD PAN

In classical mythology, Pan is traditionally the god of woods and shepherds, a half-human creature with the legs and feet of a goat. He was also a companion of Dionysus and his satyrs with whom Pan had his half-divine, half-animal nature in common. In philosophical-mystical circles, following the lead of the Homeric and Orphic Hymns to Pan, he was seen as the All-god as the Greek word pan means “everything.”

Most of the pre-Romantic appropriations of Pan in art go back to Virgil’s Eclogue II. 31-33, linking Pan to the pastoral life, and to two stories in Ovid’s Metamorphoses, dealing with the love story of Pan and Syrinx (I.689-714), and with Pan and the Judgment of Midas in his musical context with Apollo (XI.146-93), a sequel to the story of Midas and his famous Golden Touch. This story of Midas as a judge was by far the most popular story of Pan in the eighteenth century, where it came to be seen as the triumph of civilized perfection (Apollo) over ignorance, rusticity and popular taste (Pan). The depiction of Pan as the god of nature gained ground around the time of Romanticism, as exemplified in, inter alia, Friedrich Schiller’s The Gods of Greece (1788), Shelley’s “Hymn of Pan,” and Keats’ “Hymn to Pan” in Book I (232-306) of Endymion.

In Victorian England, the story of the death of Pan became the most important one. This was based on a passage from On the Decline of Oracles (418E-419E) by the Greek historian and philosopher Plutarch (ca. 45-120), in which he describes how the so-called daimones, minor divinities that mediate between men and the gods, are responsible for the great oracles such as Delphi. As these daimones are mortal, their death resulted in these holy places no longer being able to provide humans with messages from the gods. In On the Decline of Oracles (418E-419E), Pan is depicted as such a powerful yet mortal daimon. The popularity of this tale about Pan’s death may have to do with an interpretation of this event as heralding the birth of the Christian era at the expense of classical civilization. We see this most clearly in Elizabeth Barrett Browning’s “The Dead Pan” (1844). However, this poem also sees Pan as representing our darker animal side that needs to be repressed. Generally, Pan in English texts in the late nineteenth century came to epitomize man’s nature as divided between the heavenly with reason, piety and restraint on the one hand, and the earthly with sensual longing in various areas on the other.

Pound used the tale about Pan’s demise in "Pan is Dead" (Ripostes, 1912) as a counter-voice against E.B. Browning, and to satirize H.D. and Richard Aldington in “Tempora,” written two years later. A more serious use of Pan’s death, again using Plutarch, can be found in Canto 23 (109), although here the god is not explicitly named. Canto 21 is the only text in the whole of The Cantos in which Pan himself appears explicitly by name, near the end which contrasts “flashes” of civilization with a vision of the “permanent,” heralded by the appearance of Dionysus and “Voices of the procession.” The vision of gods and paradise is interrupted by a short passage which may well encapsulate the moral message of this Canto:

Impenetrable as the ignorance of old women.

In the dawn, as the fleet coming in after Actium,

Shore to the eastward, and altered,

And the old man sweeping leaves:

Terrell relates this statement to Midas” Golden Touch, of which he was cured by Dionysus who showed him how to wash away his curse. “Thereafter Midas hated wealth and splendor and became a worshiper of Pan, the god of nature, and spent time listening to Pan playing music on his pipes.” (88) However, it is hard to agree with Terrell’s claim that “the old man” is Silenus, the foster father of Dionysus. The “old man” rather seems an unidentified witness to history, just as the “we sit[ting] here/ By the arena, les gradins….” (21/ 98), and knowing how time moves in relentless cycles of seasons, represented by the leaves of generation – as opposed to the Elysium asphodel or flower he uses at the end of the canto to beat his mule. As such his statement is a general warning against the greedy acquirement of wealth and living in luxury, or of any military conquest and attainment of power (exemplified by Antony and Cleopatra, and their defeat at Actium), without any attempt to live in harmony with nature. Here Pound thus uses Pan in its more Romantic abstract sense of the force of Nature.