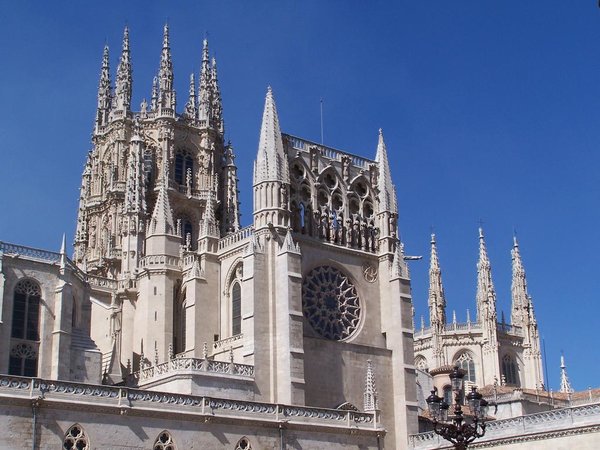 In Burgos there are other relics of the Campeador: some bones that do not belong to him and a chest - one of those, so the story runs, that he filled with sand and pawned to the Jews, Rachel and Vidas on pretense that it held booty which he should have turned over to the king, and which the Jews were to open as forfeit, if he did not redeem it at the year’s end. But the chest stayed unredeemed, at least until the end of the epic. We have here the record of the first successful deal of this bandit Cassie Chadwick, who never saw a barber through his long campaign, and who set all Spain a-rhyming - mostly of the deeds he did not do - not because he took Valencia, but because he embodied the Zeitgeist and all the strife against Islam.

From the “Puerta Santa Maria” I wandered about the town seeking breakfast, and to see that web of spun stone, the cathedral, from its divers sides and angles. It is a white cob-web, delicate as no picture seems to show it.

One never realizes the marvelous detail of these old cathedrals until one comes upon some sheltered corner where time has not eaten the lines into a haze, and finds there little six-inch gothic arches with columns a half-inch thick, in perfect miniature of the great arches that tower above them and in no wise detracting from the lines of the whole.

Victor Hugo has done “Notre Dame”: but the cathedral in Paris seems crude when one is in Burgos.

The wonder that comes upon one entering the cathedral of Burgos, with the memory of dusky cathedrals of other towns upon him is the light. Here when they worship they will not hide themselves in midnight for the homage of noonday.