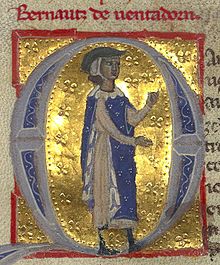 Bernard de Ventadorn was from the castle of Ventadorn in Limousin. He was a man from a poor family, the son of a servant who was an oven-tender and heated the oven to cook the bread for the castle. He grew handsome and skilled, and knew how to compose and sing, and he was courtly and educated. The Viscount Ventadorn, his lord, was greatly pleased with him and his composing and singing, and honored him greatly. Now, Viscount Ventadorn had a wife who was beautiful and gay and young and noble, and she was pleased with Sir Bernard and his songs, and she fell in love with him and he with her, so that he made his poems and songs about her, the love that he had for her and her noblesse. Their love lasted for a long time before the viscount the lady's husband, and the other people realized it. And when the viscount caught on, he distanced Sir Bernard from him and had his wife shut in under guard. Then he had the lady dismiss Sir Bernard, and made him agree to leave and depart from the district. So he left, and went to the Duchess of Normandy,1 who was young and of great nobility, and well-versed in worthiness and honor and eulogy. And she was most pleased with Sir Bernard's poems and songs, so she received, honored, and supported him and and gave him many great favors. He was at the court of the duchess for a long time and he fell in love with her and she with him, so Sir Bernard made many good songs about it. But King Henry of England took her to wife and took her from Normandy and took her to England. Sir Bernard stayed behind, sad and ailing, and he left Normandy and went to the good count Raymond of Toulouse, and was with him at his court until the count died. And when the count was dead, Sir Bernard abandoned the world, and composing and singing and the world's solace, and entered the order of Dalon and died there. And all that I have told you about him was told to me by Viscount Eble of Ventadorn, who was the son of the viscountess Sir Bernard loved so much.

1. The Duchess of Normandy -  Eleanor d'Aquitaine. Only two months after her marriage to Louis VII was annulled, Eleanor married Henry, Duke of Normandy, in May 1152. For two years, before Henry became King of England under the name of Henry II, she was thus Duchess of Normandy. It was at this time that Bernart came to sing at her court.